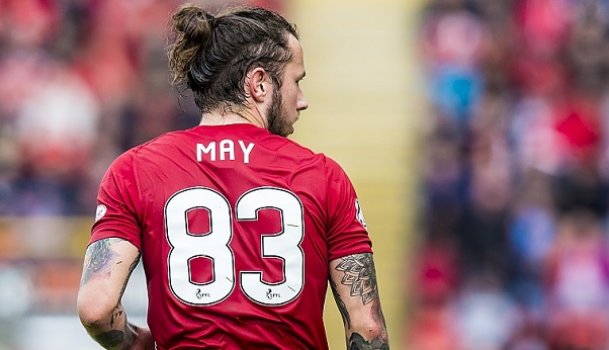 Craig Fowler selects his SPFL Team of the Week, with Aberdeen striker Stevie May the star man for his double against Dundee.

Craig Fowler selects his SPFL Team of the Week, with Aberdeen striker Stevie May the star man for his double against Dundee.

GK - Jack Hamilton (Heart of Midlothian)
Hearts were able to secure a clean sheet and a point from their trip to Ibrox thanks to the fabulous play of centre-backs John Souttar and Christophe Berra and goalkeeper Jack Hamilton. In addition to making two great stops, the young custodian confidently came for a bunch of crosses as the game entered the closing stages and Rangers upped the pressure.

DR - Richard Tait (Motherwell)
The right-back sent Motherwell on their way to a first victory of the league season with a 2-0 triumph over Ross County, popping up in the penalty area to sweep home a cross from the right. While Allan Campbell and Ryan Bowman were excellent off the bench, it was Tait who excelled throughout the 90 minutes.

DC - Callum Fordyce (Queen of the South)
It's two wins from three for Gary Naysmith's side after a 1-0 victory over Dumbarton at Palmerston Park. Defender Fordyce, who hadn't scored since the penultimate game of the 2014/15 season, has now notched in consecutive league games, this one good enough for all three points thanks also to his efforts at the back.

DC - Kristoffer Ajer (Celtic)
Going back to the ground where he excelled on loan last season, the young Norwegian put in another confident performance as a young Celtic side registered a 2-0 victory over Kilmarnock. Allowed time to bring the ball out of defence, Ajer often looked like a midfielder rather than a centre-back, such was his assured stature.

DL - Lewis Strapp (Elgin City)
On loan from Morton, the left-back put in a promising display as Elgin fought back from two goals down at home to Clyde to win 3-2 and end a six-month wait for a League 2 triumph. A constant threat on the left, Strapp provided a cross for Chris McLeish to net the equalising goal.

MC - Greg Docherty (Hamilton Accies)
The midfielder seemed to be everywhere on Saturday as Hamilton shocked Hibs with a thoroughly deserved 3-1 victory at Easter Road. Once again, Accies are defying pre-season expectations that they would be languishing at the foot of the table, having racked up six points out of nine so far.

MC - Ryan Sinnamon (Annan Athletic)
Berwick created some chances against Annan but not only did they fail to take the majority of them, they almost seemed powerless to stop the visitors at the other end as Annan won 5-1. With a few Galabankies excelling, it was Sinnamon who gets the nod in this team, with an assist and a goal (and a beautifully curled free-kick which inched just wide) in a dominant display.

MC - Joe Cardle (Dunfermline Athletic)
The winger netted twice as Dunfermline got their first victory over rivals Falkirk in six years. Taking advantage of some calamitous defending, not to mention two red cards, the hosts were able to build a 2-0 advantage before Tom Taiwo was able to pull one back for the nine men. Cardle, though, settled any nerves with a low drive in stoppage time to secure the win.

FC - Gavin Reilly (St Mirren)
The forward continued a very impressive start to life in Paisley with two goals as St Mirren ended Livingston's long unbeaten run. Having struggled for goals and confidence in each of the last two seasons, Reilly appears to be getting back to his best form, with six from his first eight games this term.

FC - Stevie May (Aberdeen)
The signing from Preston North End is already beginning to pay back what Aberdeen splashed out for his services. After giving his side the lead with a glancing first-half header, May then won the match for his new side with a thumping finish from 16 yards right into the top corner of the Dundee net, securing a 2-1 win and his place as star man in this week's side.

FC - Michael Moffat (Ayr United)
A terrific performance from Moffat, including a fourth goal of the campaign, was rewarded with the striker being substituted at Stranraer. 3-1 up and playing the better stuff, manager Ian McCall perhaps thought it fitting to take the forward off, to both give him an ovation from the travelling fans and save his legs for future weeks. Moffat then sat and watched as the Blues struck twice in the space of two minutes to level the match but Paddy Boyle netted a late winner.