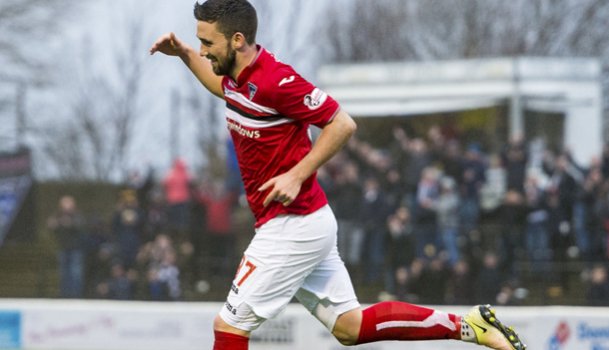 Craig Fowler selects his latest SPFL Team of the Week, with Dunfermline striker Nicky Clark the star man for his four-goal show against Dumbarton.

Craig Fowler selects his latest SPFL Team of the Week, with Dunfermline striker Nicky Clark the star man for his four-goal show against Dumbarton.

GK - Chris Smith (Stirling Albion)
The keeper had a busy afternoon as Stirling made it three wins and three clean sheets in the space of a week with a 2-0 victory at Cowdenbeath, despite the hosts dominating much of the first half. Among Smith's many highlights was a sixth-minute penalty stop from former Hearts striker Dale Carrick.

DR - Lewis Kidd (Falkirk)
A workmanlike showing from Kidd, who managed to effectively get up and down the right flank in Falkirk's win over his old side Queen of the South. He would set his team on the path to victory with a terrific free-kick just before half-time.

DC - Andrew Considine (Aberdeen)
The Aberdeen stopper is enjoying an excellent season and it continued on Sunday as Partick Thistle came to town in the Scottish Cup. Considine, along with Ash Taylor, successfully managed to corral the Thistle strike partnership of Chris Erskine and Kris Doolan, thereby robbing the away side of their firepower and ensuring Aberdeen's passage to the semi-finals.

DC - Martin McNiff (Clyde)
The Clyde rearguard still managed to concede two goals to leaders Forfar in a draw at Broadwood but the unit was much improved on recent showings. In their second game since the departure of Barry Ferguson, McNiff was the best player on the park, doing an admirable job of leading the defence.

DL - James Penrice (East Fife)
Another terrific performance from Partick Thistle's teenage prospect, who continues to shine in his loan spell at Barry Smith's East Fife. Chris Duggan got both goals to boost their promotion hopes but it was Penrice, sprinting up and down the flank from left-back, who was the star of the show again.

MC - Nat Wedderburn (Dunfermline Athletic)
Another dominant performance from the central midfielder, who's been in terrific form since the turn of the year. Once again he controlled the midfield area, setting the platform for Dunfermline to hammer five goals past a beleaguered Dumbarton.

MC - Scott Brown (Celtic)
The Celtic captain was full of his usual hard running, both on and off the ball, as Celtic survived a bit of a scare to dispose of St Mirren in the Scottish Cup, coming back to win 4-1 and set up a semi-final meeting with Rangers.

MC - John McGinn (Hibernian)
The talismanic playmaker was at his best once again on Saturday, driving forward with the ball and making things happen. He opened the scoring with a terrific drive and drew the foul which resulted in Ayr being reduced to 10 men. Hibs would go on to win the game 3-1, as they refuse to relinquish their Scottish Cup crown.

FC - Joe Garner (Rangers)
Due to receiving lengthy treatment for a head knock, Garner actually only played 32 minutes despite coming on as a half-time substitute against Hamilton in the Scottish Cup. And yet, he still managed to bag a hat-trick - though he's got Michael O'Halloran to thank for not claiming the third goal, which deflected off the Rangers attacker before finding the back of the net.

FC - Nicky Clark (Dunfermline Athletic)
What's better than scoring three? Why, scoring four of course! That's what former Queen of the South and Rangers hitman Nicky Clark inflicted on Dumbarton this past weekend, getting over a couple of bad misses against Hibs the following week by going on a goal spree.

FC - Mason Robertson (Stenhousemuir)
Son of former Rangers left-back David Robertson, young Mason has signed on at Stenhousemuir and he immediately went about proving himself in the 3-1 win over Peterhead. Robertson impressed with his aerial ability and close control on the ball, as he managed to get himself on the scoresheet in the crucial victory.