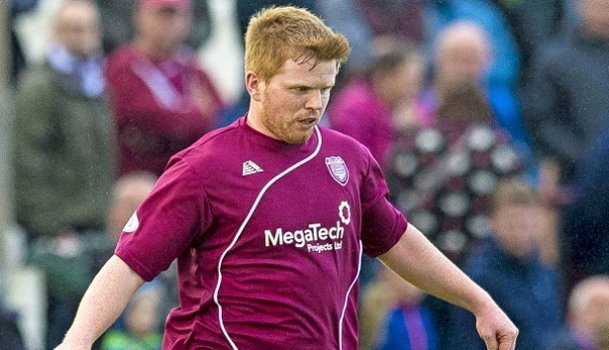 Craig Fowler selects his latest SPFL Team of the Week, with Arbroath&rsquo;s Ryan McCord the star man for his hat-trick from midfield.

Craig Fowler selects his latest SPFL Team of the Week, with Arbroath’s Ryan McCord the star man for his hat-trick from midfield.

GK - Freddie Woodman (Kilmarnock)
The on-loan Newcastle custodian made a few key saves, including one top-class stop with the game still goalless, to help Kilmarnock to a 2-0 victory at Hamilton. Lee McCulloch's side now look all but assured of their place in the top flight for another season.

DR - Ryan Williamson (Dunfermline Athletic)
It was between both Dunfermline full-backs for a place in this team, with both Williamson and Jason Talbot excelling in their 3-1 win over Morton. Seeing as there was a strong contender for left-back from the top flight, we've gone for Williamson. The young right-back excelled in an attacking sense, getting down the wing to support the forward players, and also performed his defensive duties.

DC - Craig Halkett (Livingston)
The defender was composure personified as Livingston rolled over Peterhead 4-1 in West Lothian, proving that, just because they've won the title, doesn't mean they're going to let up between now and the end of the season – that’s eight wins on the trot for Livi now.

DL - Kevin Holt (Dundee)
Dundee got a hugely important win in Neil McCann's first game as interim boss and Holt was a big reason why. With Motherwell playing a 3-4-3 formation, Holt's ability to attack down the left-hand side and whip balls into the penalty area was key. The visitors scored from three crosses from the left and eventually won 3-2.

MR - Steven Lawless (Partick Thistle)
The diminutive attacker was the best player on the park as 10-man Partick Thistle earned a draw from their trip to Tynecastle. Lawless has really come on to a game of late and his second-half strike at Tynecastle almost gave Alan Archibald's side an unlikely victory.

MC - Callum McGregor (Celtic)
For the second week in succession, McGregor was excellent at the heart of the Celtic midfield as Brendan Rodgers' men beat rivals Rangers 5-1. His energy helped the Hoops win the midfield battle and his goal five minutes into the second half killed the game as a contest.

MC - Stevie Mallan (St Mirren)
Mallan scored at least twice and arguably netted a hat-trick with a deflected effort. Regardless, he was superb once again in the centre of the park as St Mirren steamrollered Raith Rovers 5-0, ensuring there will be no automatic relegation for Jack Ross' men. And, if you haven't already, be sure to check the SPFL Twitter account for footage of Mallan's second goal. A goal of the season contender if ever there was one!

ML - Ryan McCord (Arbroath)
A hat-trick from the former Raith Rovers and Alloa Athletic midfielder helped move Arbroath to the top of the League 2 table, above Forfar, with one game to play. All three of the goals were vital as the Red Lichties beat Elgin 3-2, which leaves them needing to defeat Stirling Albion at Forthbank to clinch the title. He is this week’s star man.

FC - Liam Boyce (Ross County)
Boyce netted himself a ‘quat-trick’ in Ross County's 4-0 Highland derby win over rivals Inverness CT. It's perhaps a little unfair to deny him the star man treatment, though he was undeniably helped out by his opponents, with Ryan Esson gifting the opening goal and ICT giving away two penalties. Still, four goals in a game is something pretty special, regardless of how it comes.

FC - Oli Shaw (Stenhousemuir)
The on-loan Hibs attacker scored two vitally-important goals at the National Stadium as Stenhousemuir beat Queen's Park 2-0. That result moved Brown Ferguson's side off the bottom of the table with one game to play as Peterhead dropped to the foot.

FC - Andy Ryan (Airdrieonians)
Another player, another hat-trick. Ryan netted his side's first three goals in their massively impressive 4-0 win at East Fife. The result means Airdrie require only a point from their one remaining game against Queen’s Park to make the play-offs. Ryan also moved to within one goal of Livingston’s Liam Buchanan at the top of the charts. He's got 21 goals in League 1 this campaign.