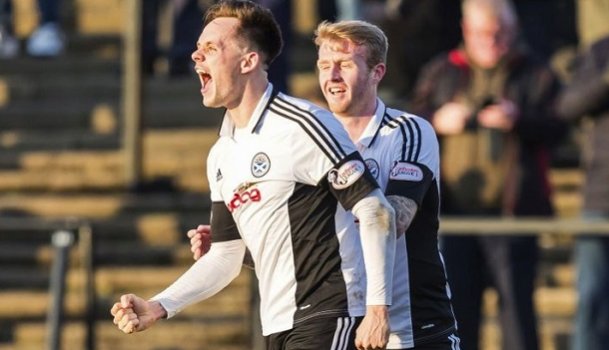 Craig Fowler selects his latest SPFL Team of the Week, with Ayr United forward Lawrence Shankland the star man for his first-half hat-trick against Queen&rsquo;s Park.

Craig Fowler selects his latest SPFL Team of the Week, with Ayr United forward Lawrence Shankland the star man for his first-half hat-trick against Queen’s Park.

GK - Marc McCallum (Forfar Athletic)
Forfar's revival continued with a 2-0 home win over East Fife, which pushes them four points clear of the relegation places. Their victory was secured, in part, by another impressive performance by McCallum between the sticks.

DC - Callum Morris (Dunfermline Athletic)
The ex-Dundee United stopper put in an impressive showing on his former ground as Dunfermline continued their strong run. The Pars are unbeaten in their last four games and Scott McDonald's equaliser was the first goal they've conceded in that time.

DC - Darryl McHardy (Elgin City)
At one end the centre-back marshalled Mr Shooty Goals himself, Mark McGuigan, rather ably. At the other end he put the ball in the back of the net as Elgin won 2-0 at Stenhousemuir.

MR - Mark Lamont (Clyde)
Clyde continued their terrific recent form with a resounding 3-0 win over previously top-of-the-table Montrose. Lamont got the Broadwood side on their way with a thumping effort from 20 yards which went in off the inside of the post.

MC - Michael Tidser (Morton)
The veteran midfielder controlled the game as Morton were able to shake off a ropey first-half performance to eventually ease their way past bottom side Brechin in the Championship.

MC - Steven Hetherington (Alloa Athletic)
The midfielder netted twice as Alloa won 3-1 away to Albion Rovers. After three games without a victory, Jim Goodwin's side moved back above Arbroath into third place in the League 1 table.

MC - Scott Robertson (Raith Rovers)
Getting the former Dundee United and Hibs midfielder back proved to be a huge boost for Raith Rovers as they defeated Airdrie 2-1 away from home to stay close to Ayr United at the top of the League 1 table. The 32-year-old was instrumental in Rovers controlling the midfield battle.

ML - Jordan Marshall (Queen of the South)
Arguably the game of the day in the lower leagues saw Livingston and Queens share six goals at Palmerston, with the hosts going 2-0 up before needing an injury-time equaliser to snatch a point. In the home ranks it was Marshall who stood out most.

FC - Lawrence Shankland (Ayr United)
A lesson in ruthless finishing as Shankland saw four chances all game and managed to bury three of them. This helped Ayr ease past Queen's Park 4-0 and keep their six-point lead at the summit.

FC - Jordyn Sheerin (Cowdenbeath)
He didn't get on the scoresheet but Sheerin's power caused problems for the home defence as Cowdenbeath continued their revival with a 2-2 draw at promotion-chasers Stirling Albion.