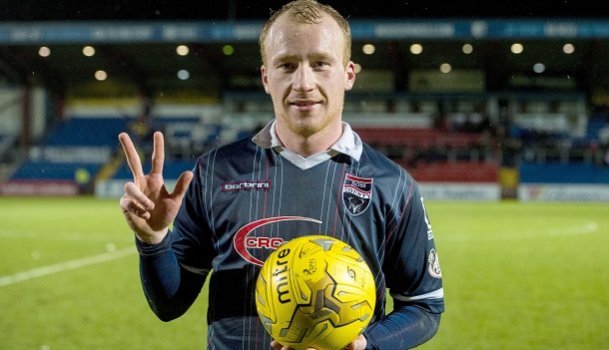 Craig Fowler selects his latest SPFL Team of the Week, with Ross County striker Liam Boyce the star man after his hat-trick against Dundee.

Craig Fowler selects his latest SPFL Team of the Week, with Ross County striker Liam Boyce the star man after his hat-trick against Dundee.

GK - Craig Gordon (Celtic)
The Scotland keeper made an astounding save from Prince Buaben at 0-0 in his side's match with Hearts at Tynecastle, while also making another couple of fine stops in the 2-2 draw.

DR - James Tavernier (Rangers)
The Rangers full-back looked back to his upbeat, energised best in Rangers' 4-2 victory over Hibernian. He made the key interception which led to the opening goal and put in a solid defensive performance, particularly against John McGinn, to help his side capture three points.

DC - Conrad Balatoni (Kilmarnock)
Kilmarnock bounced back with a crucial win over Hamilton at New Douglas Park. A week after conceding four goals at home to Aberdeen, they were able to keep a clean sheet, in part because of the solid showing from their centre-back.

DL - Ricky Forster (Ross County)
This is a cheat selection since Foster played on the right in Ross County's 5-2 come-from-behind win over Dundee. The former Rangers defender has impressed since joining this summer, and is starting to build a solid relationship with Jonathan Franks on the right of County's 4-4-2.

DM - Prince Buaben (Hearts)
The midfielder kept possession well in the face of constant pressure from the champions, and put a terrific cross into the penalty area for Sam Nicholson to level the score before half-time.

MRC - Gary Glen (Livingston)
The attacker was a key part of a rejuvenated performance from Livingston, who got over the loss of their manager Mark Burchill by winning 4-1 at St Mirren. Glen scored his side's third with a fine free-kick, after laying on the opener for Liam Buchanan.

MLC - Liam Polworth (Inverness CT)
The young midfielder is beginning to blossom into a key member of the Inverness CT side after a season where he struggled to make an impact coming off the bench. To go along with his skill and fine passing, he's adding a bit of grit to his game, and displayed such fight in his side's 2-2 draw at Aberdeen.

AM - Jason Holt (Rangers)
The midfielder scored two goals in addition to a starring role in the centre of the park as Rangers defeated Hibernian in a crucial clash at the top of the Ladbrokes Championship.

FC - Liam Boyce (Ross County)
Boyce is the first of three players in this team to have netted hat-tricks this past weekend.  His second goal, in particular, was of real quality - he rifled in an overhead kick from the edge of the six-yard box. This week's star man.

FC - Nathan Austin (East Fife)
The striker scored his second hat-trick of the season by netting all three of East Fife goals in a 3-1 win at Stirling as Gary Naysmith’s men put a poor run behind them.

FC - Craig Malcolm (Stranraer)
The Blues moved off the bottom of Ladbrokes League 1 in spectacular fashion with a 5-1 thumping of Stenhousemuir at Ochilview. The visitors were actually trailing until Malcolm started a sequence of three goals in four minutes. He then completed his treble from the spot late on.