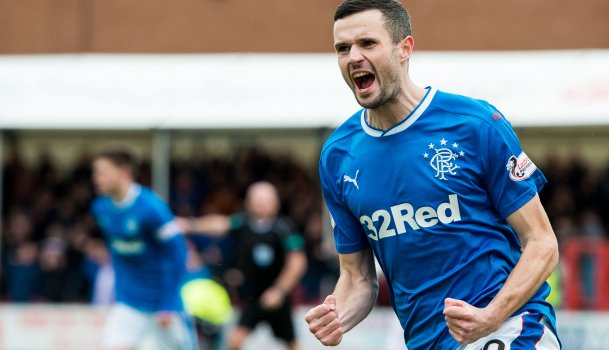 Craig Fowler selects his SPFL Team of the Week, with Rangers midfielder Jamie Murphy named star man for his goal and assists against Hamilton.

Craig Fowler selects his SPFL Team of the Week, with Rangers midfielder Jamie Murphy named star man for his goal and assists against Hamilton.

GK - Alan Mannus (St Johnstone)
The goalkeeper was required to pull off a few good stops as St Johnstone managed to keep a clean sheet and earn a point from their trip to Celtic Park.

DRC - Stephen O'Donnell (Kilmarnock)
Another place in the Team of the Week for the impressive right-back, who scored a terrific long-range daisy-cutter in Kilmarnock's win over Motherwell, a result which moved the Rugby Park side into the top six.

DC - Efe Ambrose (Hibernian)
Not only was the Nigerian excellent defensively in Hibs' 2-0 win over Aberdeen, his tendency to charge forward with the ball helped launch numerous attacks and kept the visitors on the back foot throughout.

DLC - Ross Dunlop (Stenhousemuir)
The defender impressed alongside his brother at the heart of the Stenny defence as they beat Edinburgh City 1-0. The game's only goal was netted by Mr Goals himself, Mark McGuigan.

MR - Liam Polworth (Inverness Caledonian Thistle)
The 23-year-old was terrific in the midfield area as Inverness raced into a 3-0 half-time lead over Crusaders in the IRN-BRU Cup semi-final. The Northern Irish side did make a spirited fightback, aided by Brad McKay's red card, but Polworth and his team-mates showed enough tenacity to hold on for a place in the final with a 3-2 triumph.

MC - Danny Handling (Dumbarton)
The former Hibs man was a stand-out as Dumbarton booked themselves a place in the IRN-BRU Cup final. The Sons were trailing to The New Saints before Handling popped up with a stunning equaliser and the tie was won when Dimitris Froxylias sent a superb free-kick into the back of the net.

MC - Dylan Easton (Forfar Athletic)
A creative masterclass from the former Elgin City playmaker as Forfar Athletic showed significant signs of life at the tail end of League 1, smashing Stranraer 5-1. Easton even managed to get on the scoresheet as the hosts moved above both Queen's Park and Albion Rovers and out of the relegation places.

ML - Jamie Murphy (Rangers)
Josh Windass may have walked away with the match ball from Rangers' 5-3 victory at Hamilton Accies on Sunday afternoon, but the brightest star on the day was his team-mate Jamie Murphy. The January signing scored once, set up three more and generally excelled on the SuperSeal Stadium's artificial turf. He is this week's star man.

AMR - Ryan Hardie (Livingston)
Livingston fans are rather delighted with their January signing and it's easy to see why. The Rangers loanee netted twice as the Lions thumped league leaders St Mirren 4-1 at the Tony Macaroni Arena.

AML - Josh Windass (Rangers)
He may not be star man but at least he gets a spot in this team. Three goals, which takes his recent tally up to an astonishing nine in his last five games, is a fine return for a day's work.

FC - Simon Murray (Dundee)
While some Dundee fans may have grumbled about the loan signing of the ex-Dundee United man, there would have been no sour faces when the striker netted the second of his two late goals, snatching victory from the jaws of defeat as Neil McCann's side emerged victorious from their trip to Partick Thistle.