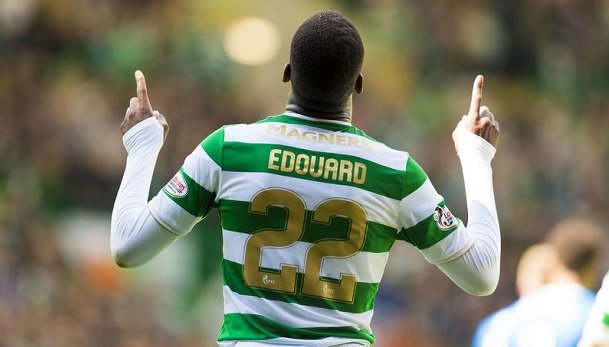 Craig Fowler selects his latest SPFL Team of the Week, with Celtic's Odsonne Edouard the star man after his magnificent double.

GK - Robbie Mutch (Falkirk)
The goalkeeper made three top saves as the Bairns were able to end their season on a high with a 1-0 victory over St Mirren.

DC - Cedric Kipre (Motherwell)
He may not have executed a back flip, but Kipre still delighted the Fir Park faithful on Saturday with the winning goal in their come-from-behind 2-1 triumph over Dundee.

DC - Jamie Adams (Ayr United)
The midfielder valiantly filled in at centre-back as Ayr United defeated Albion Rovers 2-0 to become League 1 champions. The Honest Men went into the day trailing Raith Rovers, but Alloa's 0-0 draw at Stark's Park enabled them to leapfrog the Kirkcaldy side and into the second tier.

MR - Kallum Higginbotham (Dunfermline)
The winger netted twice and terrorised Dumbarton as the Pars won 4-0 at East End Park and clinched their spot in the play-offs.

MC - Dominic Ball (Aberdeen)
The ex-Rangers man performed excellently on Friday night as the Dons brushed aside Hearts, winning 2-0 and moving up into second place in the Ladbrokes Premiership.

MC- Scott Allan (Hibernian)
The midfielder was not short of buddies in the Easter Road crowd after sparkling in the game of the season in the Ladbrokes Premiership. Allan scored one and made a couple more as Hibs defeated Kilmarnock 5-3 in an absolute thriller.

FC - Stephen Dobbie (Queen of the South)
Another hat-trick for the Queen of the South striker who took his tally to 27 for the season as the Doonhamers defeated Brechin City 5-1, consigning the Glebe Park side to a season without victory in the Championship.

FC - Odsonne Edouard (Celtic)
While he didn't score a hat-trick, the young French striker did net twice and assist another as Celtic won the title by heavily defeating their arch rivals. That's got to be worth a star man award.

FC - Martin Rennie (Montrose)
He didn't score and only played 46 minutes after coming on at the end of the first half for the injured Lewis Milne. However, he still deserves to make this team for a superb performance, full of hard running, determination and a sheer will to impose himself on the game, as Montrose drew 1-1 with Elgin City to become League 2 champions.