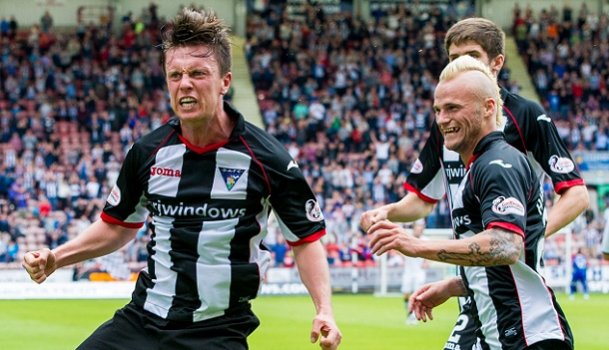 SPFL Team of the Week #1

Craig Fowler selects his SPFL Team of the Week from the opening weekend, with Dunfermline&rsquo;s Joe Cardle the star man after his hat-trick against Dumbarton. &nbsp;

Craig Fowler selects his SPFL Team of the Week from the opening weekend, with Dunfermline’s Joe Cardle the star man after his hat-trick against Dumbarton.
GK - Joe Lewis (Aberdeen)
The Aberdeen shot-stopper was called on three occasions to keep the scores level in Aberdeen's 0-0 draw with St Johnstone and each time he responded to the challenge. His reactionary save from Danny Swanson shortly before half-time was particularly impressive.
DC - Ben Heneghan (Motherwell)
The Motherwell centre-back was a colossus for the Steelmen, winning so many headers that when the final tally was entered into Opta's system, it presumably broke the computer. He was a big reason for Mark McGhee's side holding on to a 2-1 win at Kilmarnock.
DC - Kolo Toure (Celtic)
Celtic fans are rightly excited about their new signing after Toure had an excellent full debut in the 2-1 win against Hearts at Tynecastle. His reading of the game was outstanding and he always seemed to appear just at the right time to deny the hosts.
DC - Andy Graham (Alloa Athletic)
Impressive first league game from the summer signing from Ayr. Graham slotted in beside Jason Marr and the pair looked as if they had been playing together for years. The same could be said of the entire Alloa team as they thumped Peterhead 4-0.
MR - Dylan Easton (Clyde)
Easton scored with a terrific strike amid a highly-impressive league debut after making the summer switch from Elgin. Again, Clyde are the favourites for the Ladbrokes League 2 crown, and if Easton can produce the goods every week then Barry Ferguson's side could make it out of the bottom tier.
MC - Chris Erskine (Partick Thistle)
It's like he never left. Erskine slotted in at No10 behind striker Kris Doolan and the two players who fired Thistle into the Premiership four years ago rekindled their relationship like two old pals getting together for a pint after many years apart. He also scored a beauty of an opening goal to help defeat Inverness Caley Thistle at Firhill.
MC - Scott Pittman (Livingston)
Two goals and a masterful performance from the central midfielder as Livingston hammered fellow promotion candidates Stranraer 5-1 at the Tony Macaroni Arena. The former Bo'ness United playmaker will look to lead the charge as they aim for an immediate return to the Championship.

MC - Ali Crawford (Hamilton Accies)
Accies were tipped by many to be relegated from the top flight but already experts are re-examining those predictions after an impressive showing in the 1-1 draw at Ibrox. Their star man on the day was Crawford. He effectively pressed the opposition midfield and scored a fantastic goal to boot.
ML - Joe Cardle (Dunfermline)
Cardle started life in the Ladbrokes Championship in the same manner he finished his time in League 1, by completely dominating the opposition. The victims on this occasion were Dumbarton. The Sons couldn't live with the powerful running of the Dunfermline winger, who netted a hat-trick in a 4-3 victory that should have been secured by a wider margin. He is this week's star man.
AM - Mark O'Hara (Dundee)
So, apparently O'Hara is an attacking midfielder. Who knew? Kilmarnock allowed their defensive utility man to walk this summer and Paul Hartley snapped him up. Clearly the Dundee boss saw something most of us didn't, as he stationed him behind striker Rory Loy in his side's 4-2-3-1 formation at Ross County and watched on as his new signing had a storming afternoon. O'Hara made the first, won the penalty for the second and generally had a terrific afternoon's play.
FC - Jason Cummings (Hibernian)
Great start to the season for the striker rated at £1.7m by Peterborough United. Hibs are desperate to hold on to their top goalscorer and it's easy to see why. His two strikes sunk Falkirk and gave his side the perfect start to their campaign.
Back to news