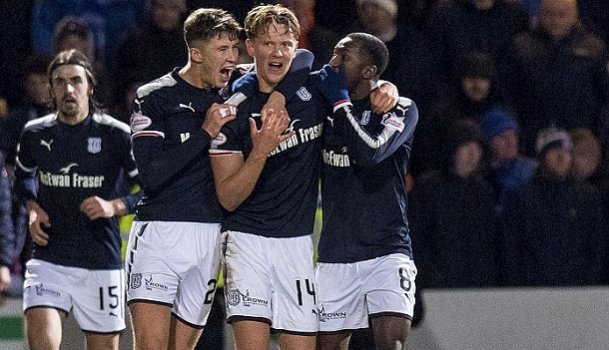 Mark O&rsquo;Hara is star man in the SPFL Team of the Week, as selected by Craig Fowler, after his double for Dundee against Rangers&nbsp;on Friday night.

Mark O’Hara is star man in the SPFL Team of the Week, as selected by Craig Fowler, after his double for Dundee against Rangers on Friday night.

GK - Craig Samson (St Mirren)
Ross County keeper Aaron McCarey earned plaudits for his display in his side's 0-0 draw with Hearts but there was an even more impressive performance this weekend and it came in a victory. Samson made several great stops, the pick of which denied Joe Chalmers just after the visitors opened the scoring.

DC - Chris Higgins (Ayr United)
The ex-Queen of the South defender was immense at the back for Ayr as Ian McCall’s men extended their winning run to six games and kept a three-point lead over Raith Rovers with a 2-1 win over in-form Alloa at the Indodrill Stadium.

DC - Alan Lithgow (Livingston)
Livi moved back into third place in the Ladbrokes Championship with a stunning 3-0 victory away to Queen of the South. The performance saw several members of the Lions squad excelling, with Lithgow's centre-back partner Craig Halkett and midfielder Shaun Byrne unlucky to miss out.

DC - Andy Considine (Aberdeen)
A composed and confident showing from the long-serving Dons defender helped his side continue their fantastic run at Rugby Park with a 3-1 victory. The Dons scored twice in the opening 10 minutes and even though Kilmarnock would cut the deficit, the away side's defence made sure that would be all they got from the match.

MR - James Forrest (Celtic)
The consensus pick for man of the match in the Betfred Cup final this past weekend, Forrest was easily his side's best player in the first half before he netted the crucial opening goal after the break, curling a superb effort into the far corner and putting Celtic on their way to glory.

MC - Mark O'Hara (Dundee)
Injury to Lewis Spence has opened up a space for O'Hara in the Dundee midfield and the 21-year-old grabbed his opportunity with both hands on Friday night. O’Hara netted in last season's victory over Rangers and did so again with a double in the 2-1 triumph in front of the BT Sport cameras, earning him 'star man' honours. Dundee hadn't defeated the Ibrox side at Dens Park since 1992 before last season. Now they've done it twice in nine months.

MC - Mark Whatley (Arbroath)
An excellent showing from the central midfielder helped Arbroath fight back from a goal down against their rivals as Bobby Linn's late winner broke Forfar hearts at Gayfield. The 2-1 victory pushed Dick Campbell's men into third place at the expense of Alloa.

ML - Jordan Allan (Elgin City)
Allan charging down the left wing and delivering in a dangerous ball into the area was a regular feature of Elgin's 5-1 thumping of Berwick Rangers. He may not have scored, and indeed only notched one assist, but he played a part in four of the goals in the one-sided contest.

AM - Kyle Wilkie (East Fife)
The midfielder netted twice as East Fife came from a goal down in stunning style, defeating Airdrieonians 6-1 in Methil. The game was also memorable for stand-out performances from Mark Lamont and Chris Duggan.

AM - Lewis Vaughan (Raith Rovers)
Barry Smith had to change things on Saturday to get the best out of his side and overcome a stubborn Queen's Park . He moved Vaughan to a deeper role in the centre of the park from his usual spot on the wing, and the natural striker played a vital part in the victory. Adding some creativity to the engine room, Raith upped their game and finally overcome Gus MacPherson's visitors 2-0.

FC - Robert Thomson (Morton)
Gary Harkins was very unfortunate not to get a space in this team, having run the show from the middle of the park in Morton's 3-0 win at Falkirk. With a number of midfielders starring this part weekend, the honour instead went to his team-mate Thomson - he was no less deserving, having bagged a brace in the victory.