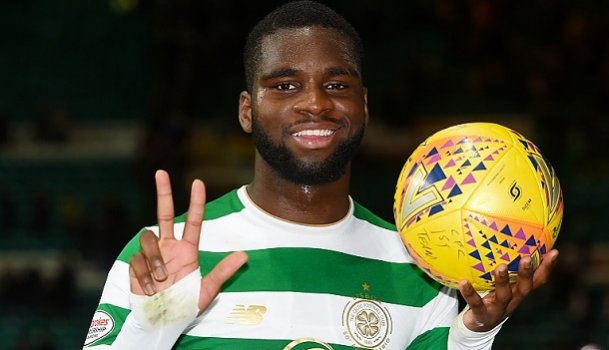 Craig Fowler selects his latest SPFL Team of the Week, with Celtic striker Odsonne Edouard the star man after his hat-trick against Motherwell.

Craig Fowler selects his latest SPFL Team of the Week, with Celtic striker Odsonne Edouard the star man after his hat-trick against Motherwell.

GK - Greg Fleming (Peterhead)
Peterhead ultimately coasted to a 3-0 victory over Edinburgh City at Balmoor but for a while the match was a lot tighter than the scoreline suggests. Before conceding a penalty and going down to 10 men shortly after the break, the visitors had played well, with Fleming called into action on more than a couple of occasions.

DC - Andy Dowie (Dumbarton)
The Sons managed to pull of the shock of the weekend in the Championship by going to St Mirren and winning 1-0. Tom Walsh scored the only goal and shone in the performance but, with a plethora of midfielders to choose from this week, we've gone for Dowie instead. Solid at the back, he played a key role in helping his side keep a clean sheet.

DC - David Bates (Rangers)
Drafted into the starting XI following an injury to Bruno Alves, then forced to mesh with two different centre-back partners after Danny Wilson was forced off with concussion, Bates put in a terrific performance as Rangers defeated Aberdeen 2-1 at Pittodrie.

DC - Paul Hanlon (Hibernian)
He's arguably put together the most impressive season of any centre-back in Scottish football this year. Imperious once again, Hanlon helped Hibs move to within a point of second place after a 1-0 victory over Partick Thistle.

DM - Glen Kamara (Dundee)
One of the signings of the season, Kamara sparkled again in the middle of the park in his role as the defensive screener. His ability not only to disrupt the opposition but to also beat opponents with some crafty footwork helped Dundee record a vital 2-0 victory at Ross County.

MC - Scott Fraser (Dundee United)
Two first-half goals from the impressive midfielder proved enough for Dundee United to defeat Dunfermline at Tannadice and move them back to the top of the Ladbrokes Championship. Even without his heroics, one of which was a sublime free-kick, Fraser may have found himself in this select XI for an excellent all-round display in the 2-1 win.

MC - Scott Robertson (Raith Rovers)
Raith haven't hit the heights in their last two home games against Queen's Park then Alloa but they've done enough to keep winning and stay within touching distance of Ayr United. On Saturday it was Scott Robertson impressing in the centre of the park as they defeated the Wasps 2-1 to maintain their 100% home record.

AM - Gary Harkins (Morton)
Cruelly left out of last week's team in favour of his club-mate Robert Thomson, Harkins gets his reward this time around for another goalscoring display as Morton swept aside Brechin City on Saturday. Known for his precocious talents, Harkins also stood out for some defensive tenacity as his side ran out 4-1 winners.

FC - Odsonne Edouard (Celtic)
This week's star man for obvious reasons. The on-loan PSG striker hasn’t had too many opportunities this season but he bagged a hat-trick as Celtic ended the Steelmen-Bhoys trilogy in triumphant fashion, winning 5-1 at Parkhead.

FC - Eamonn Brophy (Kilmarnock)
Another striker who has had to be patient - Brophy scored the winner in his side's 2-1 victory at St Johnstone and put in a highly-impressive showing in attack. In fact, the only disappointing aspect was that he didn't add another goal, which would have been the least he deserved for his efforts.

FC - Luke Donnelly (Queen's Park)
Continually finding space to attack East Fife in his role playing just off striker Billy Mortimer, Donnelly starred in Queen's Park's vital 2-1 victory. His double ensured the Spiders ended a run of five successive defeats and moved them to within a point of second-bottom Forfar.