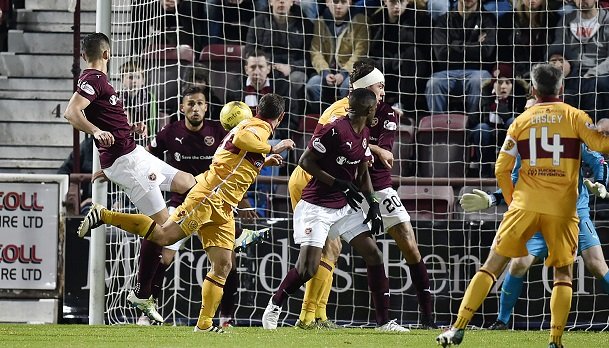 GK - Faycal Rherras (Hearts)
What? Yes, we know he's a left-back. However, Rherras showed that the last line of defence needn't be the goalkeeper with three (yes, three!) goal-line clearances against Motherwell on Saturday. The game finished 3-0 so it played a massive part in Hearts securing victory. Besides, there were no stand-out performances from actual goalkeepers this week.

DC - Darren O'Dea (Dundee)
Every member of the Dundee back three had an excellent showing as the Dens Park club beat Inverness CT 2-1 despite having only 38% possession. While the visitors dictated the tempo, they were forced into funnelling their attacks out wide and found the home defence too difficult to penetrate with whipped balls into the area.

DC - Kostadin Gadzhalov (Dundee)
In addition to heading everything that came his way, the Dundee centre-back scored what would prove to be his side's winning goal when he nodded home Tom Hateley's cross.

DC - Jay McEveley (Ross County)
The former Scotland international is beginning to find his feet in Dingwall after another solid showing in Ross County's 1-1 draw with Hamilton Accies. The hosts were much the better side for the first 70 minutes and can feel aggrieved at not taking all three points.

MR - Arnaud Djoum (Hearts)
The Hearts midfielder started in the No 10 role and was instrumental in his side's victory over Motherwell. Executing through balls to perfection, he laid chances on a plate for Bjorn Johnsen and Jamie Walker to score Hearts' first and third goals respectively.

MC - Stuart Armstrong (Celtic)
The midfielder's off-the-ball movement was a massive part of Celtic's victory over Aberdeen in the Betfred Cup final. When James Forrest looked to cut inside, Armstrong would attack the wing. This had the effect of puzzling the Aberdeen defenders, who were marked up man-to-man, and played a large part in creating both the second and third goals.

MC - Darian MacKinnon (Hamilton Accies)
The combative midfielder's excellent season continued with a strong showing in Dingwall. MacKinnon was Hamilton's star player throughout as he did his best to make life difficult for Ross County. Accies salvaged a point with an Ali Crawford free-kick.

MC - Scott Brown (Celtic)
Scott Brown's renaissance continued apace with another tireless display in the Betfred Cup final. It's not just a case of him being improved on last season, Brown is playing his best football of the decade under Brendan Rodgers and helped lead his side past Aberdeen.

ML - James Forrest (Celtic)
The man of the match from Sunday's showpiece, Forrest frightened the life out of Derek McInnes' side as he constantly got on the ball and drove at his opponents. He netted the second goal of the game with a terrific run and drew the foul from Anthony O'Connor which killed the contest off via Moussa Dembele’s penalty.

FC - Bjorn Johnsen (Hearts)
Two goals for the American/Norwegian striker which really could have been three, had he not been adjudged to have strayed offside prior to a first-half header. He's recently established himself as the first-choice striker at the club.

FC - Joe Dodoo (Rangers)
We're not usually in the habit of including substitutes, but then substitutes don't typically score twice in the final 15 minutes to turn defeat into a memorable win. Dodoo's first in the 2-1 win over Partick Thistle was a stunning strike worthy of a TOTW place alone.