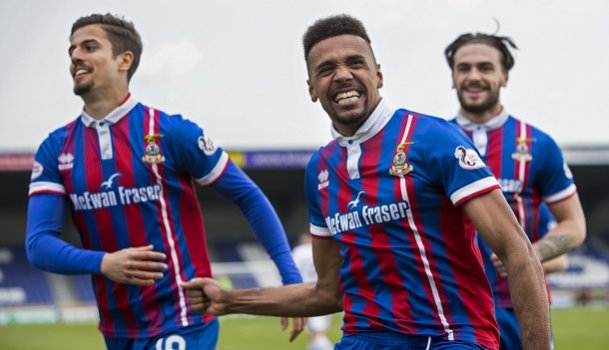 Craig Fowler selects his SPFL Team of the Week, with Inverness CT striker Nathan Austin the star man after his hat-trick against Dumbarton.

Craig Fowler selects his SPFL Team of the Week, with Inverness CT striker Nathan Austin the star man after his hat-trick against Dumbarton.

GK - Lee Robinson (Dunfermline Athletic)
The shot-stopper made a couple of excellent saves as Dunfermline swatted Brechin aside with a 4-0 win at East End Park. The Pars, with a five-point lead and a much superior goal difference to fifth-place Morton, are looking in a very strong position to make the play-offs.

DC - Kirk Broadfoot (Kilmarnock)
Another excellent performance from the centre-back, who has enjoyed a terrific first season back in Scotland. On this occasion he helped Killie to a sixth successive win as Steve Clarke's men defeated Hamilton Accies 2-1 at New Douglas Park.

DC - Bilel Mohsni (Dundee United)
While some questioned the signing, United fans are besotted with their new centre-back, whom they regard to be one of the best they've had in the position in years. Mohsni was head and shoulders above the rest as United won their third home game in a row without conceding a goal, triumphing 1-0 over Falkirk.

DC - Kieran MacDonald (Airdrieonians)
A career left-back, MacDonald has impressed at centre-back at times this season and did so again as the Diamonds defeated Albion Rovers 2-0 at the Excelsior Stadium. While lacking the size of a traditional centre-half, MacDonald's pace and reading of the game sees him through.

MR - Jack Boyle (Clyde)
The attacking midfielder, on loan from English Premier League side Huddersfield, netted twice as Clyde made it six home victories on the trot with a 2-1 win over Stirling. With Stenhousemuir holding two games in hand and a three-point lead, it will be difficult for the Bully Wee to make the play-offs but their form under Danny Lennon should set them up well for the following campaign.

MC - Scott Martin (Arbroath)
Once again the on-loan Hibs midfielder dominated the centre of the park as Arbroath surged to victory, beating East Fife 5-0 away from home. The Red Lichties have all but secured their place in the play-offs thanks to a much superior goal difference over fifth-place Stranraer.

MC - Stephen McGinn (St Mirren)
Despite not being at full fitness, the experienced midfielder still managed to put in a terrific performance full of heart and determination as St Mirren were crowned Championship champions thanks to their 0-0 draw with Livingston.

MC - Harry Paton (Stenhousemuir)
The on-loan Hearts playmaker scored two goals and was the undoubted star man as Stenhousemuir kept Clyde at arm's length in the League 2 play-off hunt, thanks to an injury-time winner from Mark Ferry in their 3-2 victory over Annan Athletic.

ML - Callum McGregor (Celtic)
The Scottish international was preferred to Scott Sinclair in the Celtic starting XI for the cup semi-final with Rangers and showed why with an excellent performance. McGregor netted the second with a cool finish and played a huge role in setting up the fourth, a penalty by Olivier Ntcham.

FC - Curtis Main (Motherwell)
Aberdeen's centre-backs might be having nightmares about the Motherwell striker for weeks as his dominant display, along with partner Ryan Bowman, enabled the Fir Park side to reach a second national final this season. Main scored his side's first and second goals as the Steelmen defeated Derek McInnes' charges 3-0 at Hampden.

FC - Nathan Austin (Inverness Caley Thistle)
Inverness CT continue to enjoy a strong end to the 2017/18 season as they swept aside Dumbarton 5-1 in the Highlands. Scoring three of those goals was former Falkirk forward Austin, who is this week's star man.