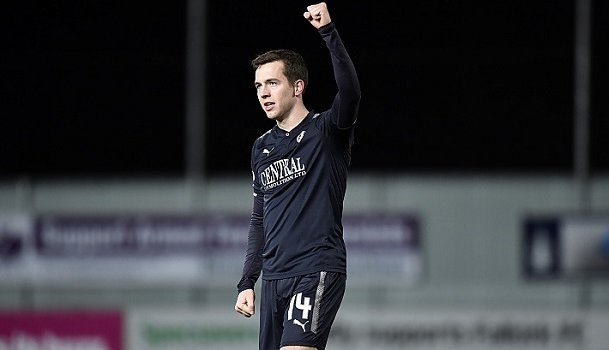 Craig Fowler selects his SPFL Team of the week, with Falkirk&rsquo;s Louis Longridge&nbsp;star man for his performance in the 6-1 win over Dundee United.

Craig Fowler selects his SPFL Team of the week, with Falkirk’s Louis Longridge star man for his performance in the 6-1 win over Dundee United.

GK - Cammy Binnie (Stirling Albion)
Darren Smith made the headlines with a double in the 2-0 defeat of Berwick Rangers to take his tally to 18 for the season but Stirling were also solid at the back. Young keeper Cammy Binnie claimed a first shut-out since October with an assured performance throughout and made some good stops at important points in the match.

DC - Jean-Yves M'voto (Dunfermline Athletic)
The big defender was a rock as Dunfermline continued their recent revival with a third win on the trot. On this occasion it was Dumbarton who fell to Allan Johnston's side, going down 1-0 at the YOUR Radio 103FM Stadium.

DC - Darren Brownlie (Queen of the South)
Queens fans could only describe the defender's performance as ‘immense’ after the Doonhamers were able to secure all three points from their trip to Livingston. Brownlie headed everything that came his way and was a big reason for the visitors keeping a clean sheet in their 1-0 triumph.

DL - Tommy Robson (Falkirk)
The recently-signed Sunderland loanee started at left-wing back as Falkirk completely ripped apart Dundee United on Saturday, winning 6-1. Robson was a constant threat down the flank and helped himself to a goal in the one-sided rout.

MC - Craig Sibbald (Falkirk)
The second of three Falkirk players to make it into Team of the Week. This is down to the lack of a full card and mainly the brilliance of the Bairns' performance. Sibbald put in a midfield masterclass, running the show as Falkirk earned themselves a huge and confidence-boosting win.

MC - Steven Hetherington (Alloa Athletic)
Another accomplished display from the midfielder as Alloa Athletic were able to get the better of Albion Rovers by 3-1 in what was a very entertaining 90 minutes of football at the Indodrill Stadium.

MC - Dario Zanatta (Raith Rovers)
The Hearts loanee terrorised the opposing defence from the wing throughout Raith Rovers' 2-1 victory over Forfar Athletic. The result moves the Rovers back to the top of the League 1 table with two games in hand over Ayr United, who they host on Saturday.

FC - Louis Longridge (Falkirk)
Playing in his first game after signing on a permanent deal from Hamilton Accies, Longridge immediately repaid the faith bestowed upon him by manager Paul Hartley. He displayed terrific movement throughout the match and helped himself to two fine goals in the 6-1 thumping of Dundee United. He is this week's star man.

FC - Rory McAllister (Peterhead)
The prolific lower-league striker netted twice and played a big role in the fourth as Peterhead went to the home of Stenhousemuir and left with all three points. The 4-1 triumph kept the Blue Toon on the coat-tails of Montrose at the top of League 2 as they continued their recent scoring spree, with McAllister on target for the seventh game in a row.

FC - Leighton McIntosh (Arbroath)
Starting up top in Arbroath's 2-1 win over Ayr United, the striker linked well with his team-mates throughout the match, then grabbed a dramatic winning goal with two minutes to spare.