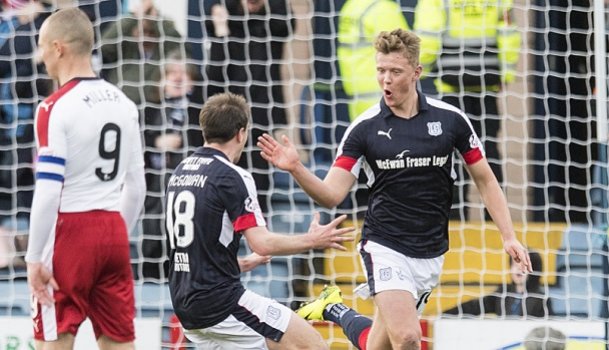 Craig Fowler selects his latest SPFL Team of the Week, with Dundee&rsquo;s Mark O&rsquo;Hara the star man for his performance against Rangers.

Craig Fowler selects his latest SPFL Team of the Week, with Dundee’s Mark O’Hara the star man for his performance against Rangers.

GK - Owain Fon Williams (Inverness CT)
Inverness managed to leave Tynecastle with a point despite travelling south with a depleted defence. They were able to do so, in large part, thanks to their goalkeeper, who repelled a late Jamie Walker penalty in order to keep the score at 1-1.

DR - Craig Halkett (Livingston)
The defender has shared time between centre and right-back this season and it was in the former position he found himself on Saturday as Livingston thumped Airdrieonians 4-0 in Lanarkshire. The 21-year-old seemed to get his head to every ball that came his way, as the visitors moved 12 points clear at the top of the League 1 table.

DC - Andy Graham (Alloa Athletic)
Alloa moved up to second place in the League 1 table thanks to an impressive 2-0 win away at Gus MacPherson's Queen's Park. Greig Spence scored the 8,000th goal of the SPFL era but the star man was defender Andy Graham, who was solid at the heart of the Wasps' rearguard.

DC - Jean Yves-M'voto (Raith Rovers)
Another top performance from the Frenchman, who is becoming a mainstay of Team of the Week. On this occasion, he's included for his heroics in Raith Rovers' 1-1 draw with Hibs, in which the defender did his utmost to keep the away forward line quiet as Raith got the tenure of John Hughes off to a positive start.

DL - Darren O'Dea (Dundee)
We're minus a left-back, so are choosing instead to cram the left-footed O'Dea in at full-back. Regardless, he deserves to be in this select XI for his performance in Dundee's 2-1 win over Rangers. The ex-Celtic man threw himself into every aerial challenge, continually repelling the Ibrox side's advances.

MR - Mark O'Hara (Dundee)
Another star from Dundee's victory on Sunday, which was the first time they've beaten Rangers at Den's Park in 25 years. O'Hara scored the opening goal and his hard-running was an asset to the hosts all game long, whether they were in or out of possession. This week's star man.

MC - Thomas Reilly (Elgin City)
The midfielder showed a good blend of strength in the challenge and composure on the ball as Elgin City hammered Clyde 4-1 at the weekend. Jim Weir's side have now remained unbeaten in their last six league games and remain firmly in the play-off spots.

MC - Stephen McGinn (St Mirren)
The 28-year-old has excelled since returning to the Championship side and put in a terrific showing, particularly in the second half, as St Mirren roared back to defeat TNS 4-1 in the IRN-BRU Cup semi-final. McGinn was the embodiment of poise on the ball and his leadership in the centre also seemed to bring out the best in Stevie Mallan beside him.

ML - James Forrest (Celtic)
Forrest continued his good form with a star turn in Celtic's 2-0 win over Motherwell on Saturday. The winger netted the second goal after twisting and turning his man before firing into the far corner of the net.

AM - Blair Alston (St Johnstone)
Having started on the right, Alston was quickly moved into the centre during Saturday's win at Ross County after a tactical reshuffle was required following an early injury to Murray Davidson. The ex-Falkirk man thrived in his new position, using his deceptive pace and attacking instincts to cause the hosts all sorts of problems. He even played a part in the first goal, firing in the shot which Jay McEveley sliced into his own net.

FC - Rory McAllister (Peterhead)
Two teams who were expected to challenge for promotion this season met at the weekend in the hopes of moving away from the relegation area. A thrilling contest at Stranraer's Stair Park finished in a 3-3 draw, with McAllister netting twice for the visitors.