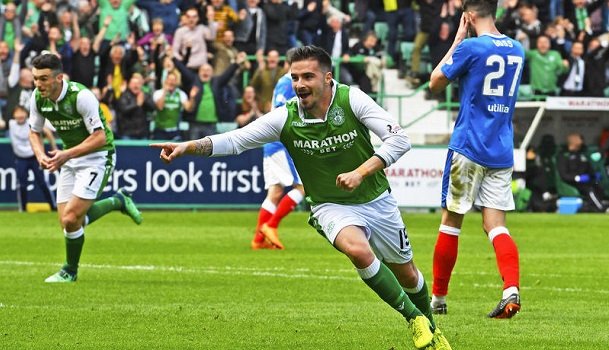 Craig Fowler selects his SPFL Team of the Week, with Hibernian striker Jamie Maclaren the star man for his hat-trick against Rangers.

Craig Fowler selects his SPFL Team of the Week, with Hibernian striker Jamie Maclaren the star man for his hat-trick against Rangers.

GK - Joe Lewis (Aberdeen)
The goalkeeper kept a clean sheet at Celtic Park as Aberdeen ended their long wait for a league win in Glasgow's East End to finish second in the Ladbrokes Premiership.

DC - Alan Lithgow (Livingston)
The centre-back was a rock as Livingston booked a place in the play-off final with a 1-1 draw against Dundee United on Friday night. The Lions were able to successfully hold on to their one-goal advantage from the first leg and will play Partick Thistle for a spot in next season's top flight.

DC - Mick Dunlop (Stenhousemuir)
The centre-back netted twice in the first leg and was then part of a resolute defensive display as Stenhousemuir won promotion to League 1 with a 2-1 aggregate win over Peterhead.

DC - Blair Malcolm (Cowdenbeath)
The midfielder covered every blade of grass as Cowdenbeath won a manic final game of the campaign against Cove Rangers to remain in the SPFL. He played in central midfield, on the wing, then moved to centre-back when Bryan Gilfillan was forced off through injury as the hosts won 3-2.

MR - Steven Lawless (Partick Thistle)
The winger was a constant source of danger from the right, including playing the through ball for the game's only goal, as Partick Thistle managed to live to fight another day in the battle against the drop. Their 1-0 win over Dundee at Dens means they'll face Livingston in the play-off final.

MC - Vykintas Slivka (Hibernian)
The Lithuanian was excellent in the centre of the park as Hibs netted five times against Rangers. Drifting out to the right on occasion, he gave Andy Halliday a torrid time in an incredible encounter at Easter Road.

MC - Youssouf Mulumbu (Kilmarnock)
In what could be his last match for Kilmarnock, the midfielder impressed in the centre of the park as Steve Clarke's side defeated Hearts 1-0 at Rugby Park.

ML - Harvey Swann (Cowdenbeath)
Swann can claim to have made the most telling contribution as Cowdenbeath avoided the drop, as he netted twice against Cove Rangers in a dramatic 3-2 win at Central Park.

FC - Jamie Maclaren (Hibernian)
The Aussie today learned of his failure to make the World Cup squad. Clearly those in charge of the national side didn't watch his performance on Sunday as the striker netted a hat-trick from open play, including the final two goals, as Hibs played out a thrilling 5-5 draw with Rangers.

FC - Ross Stewart (Alloa Athletic)
The striker's stoppage-time goal kept Alloa Athletic in their tie against Dumbarton and the visitors would take full advantage with a 95th minute extra-time Jordan Kirkpatrick winner to elevate themselves into next year's Championship.

FC - Nadir Ciftci (Motherwell)
The on-loan Celtic striker could well have played his last game for Motherwell but, if so, what a way to bow out. Ciftci scored twice, including a great mazy run, as Motherwell thumped rivals Hamilton 3-0 at Fir Park.