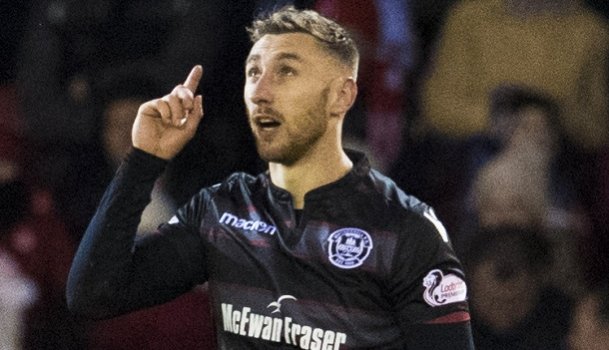 Craig Fowler selects his latest Team of the Week, with Motherwell striker Louis Moult the star man after scoring twice away to Aberdeen.

Craig Fowler selects his latest Team of the Week, with Motherwell striker Louis Moult the star man after scoring twice away to Aberdeen.

GK - Gary Woods (Hamilton Accies)
Though Accies would emerge victorious at Ibrox, creating a piece of history in the process, it didn't look that way in a one-way first half with the hosts well on top. Woods was called into making a couple of fine saves, which kept the visitors in the game and enabled them to record a stunning win.

DR - Jamie Brandon (Hearts)
There wasn't much to shout about in Hearts' first game in front of their new main stand. With the exception of Esmael Goncalves' terrific individual goal, the only stand-out display came from the young full-back who excelled in both defence and attack in the 1-1 draw.

DC - Xavier Tomas (Hamilton Accies)
After taking the lead through David Templeton's 47th-minute goal, Accies had a bit of defending to do at Ibrox. Managing to see the game out without conceding, Hamilton relied on several terrific performances from their defensive players, with Tomas in particular impressing in the 2-0 victory - their first in the league at Ibrox since 1926.

DC - Dedryck Boyata (Celtic)
Not many of Celtic's attacking players shone in the victory over Ross County but both centre-halves were at the top of their game. Boyata was both assured in his defensive duties and purposeful with the ball at his feet in the 1-0 win.

DL - Scott Tanser (St Johnstone)
Tanser has impressed at left-back for Saints since coming in for the injured Brian Easton and Saturday's win over Hibs at Easter Road was no exception. The summer signing from Port Vale didn't put a foot wrong, as the visitors managed to concede a 91st-minute equaliser and still emerge 2-1 victors.

MC - Declan McDaid (Ayr United)
Ayr survived a couple of early scares to Banks O'Dee in the Scottish Cup, twice going behind to their hosts before roaring back to win 6-2. McDaid, on as a first-half substitute, excelled on the right flank, scoring twice before half-time. His first, a smashed effort into the roof of the net, caught the eye.

MC - Fraser Fyvie (Dundee United)
The ex-Hibs midfielder dictated play from the centre of the park as Dundee United steamrolled Falkirk to move top of the Ladbrokes Championship table. All three goals were scored in the first half to give Csaba Laszlo a win in his first league match as Dundee United boss.

MC - Joe Cardle (Dunfermline Athletic)
He may not have found the net in the Pars’ 4-1 win away to Queen's Park in the Scottish Cup but Cardle certainly impressed on the wing. Not only was he an attacking menace throughout, including crossing for Nicky Clark to head home the opener, he also worked hard in defence, making a couple of important challenges in his own penalty area.

FC - Louis Moult (Motherwell)
Another week and another reminder of the Motherwell striker's quality as he bagged both goals in his side's victory over Aberdeen. Having suffered successive defeats in their previous two matches, it was an important win for the Fir Park side as they look to build some momentum going into the Betfred Cup final. Moult's header then a thumping half-volley finish assured them of that. He is this week's star man.

FC - Gavin Reilly (St Mirren)
A display of ruthlessness on display at Saughton Enclosure on Saturday as St Mirren took on Lothian Thistle Hutchison Vale in the Scottish Cup. Saints hammered their hosts in the opening half, scoring seven without reply, with Reilly bagging four goals in the period. The game would finish 7-1.

FC - Rory McAllister (Peterhead)
Another impressive double for the prolific lower-league hitman. McAllister struck twice in the second half as the Blue Toon pulled off a shock, defeating Ladbrokes League 1 title hopefuls Raith Rovers 3-0 at Balmoor.