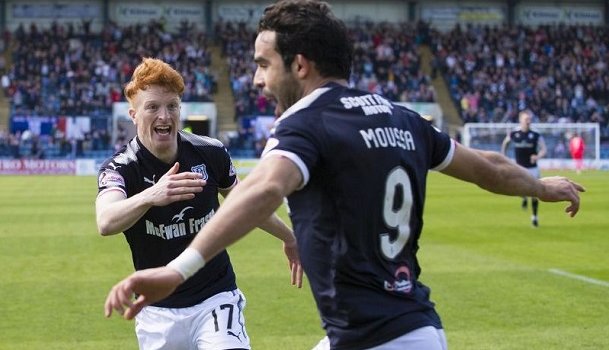 Craig Fowler selects his latest SPFL Team of the Week, with Dundee striker Sofien Moussa the star man for his two crucial goals against St Johnstone.

Craig Fowler selects his latest SPFL Team of the Week, with Dundee striker Sofien Moussa the star man for his two crucial goals against St Johnstone.

GK - Tomas Cerny (Partick Thistle)
The Czech goalkeeper made a crucial stop at 1-0 as Partick Thistle came from behind to defeat Hamilton Accies and move off the bottom of the Ladbrokes Premiership table.

DR - Shay Logan (Aberdeen)
The Dons returned to winning ways and kept themselves level on points with Rangers in the hunt for second place with a 2-0 win at Kilmarnock. Netting the second goal was Logan, who impressed at full-back throughout the 90 minutes.

DC - Paul Hanlon (Hibernian)
The defender was a rock at centre-back as Hibs outplayed Celtic and handed the champions their third loss of the league season on Saturday lunchtime.

DC - Sean Dillon (Montrose)
Montrose are 90 minutes away from becoming League 2 champions after a 2-0 win at Stenhousemuir. The visitors netted twice in the opening eight minutes then kept their hosts at bay with a stellar defensive showing. Dillon shone brightest in an impressive backline.

DL - Callum Crane (Alloa Athletic)
The left-back capitalised on an error by Andy Geggan to score what proved to be the winning goal in Alloa's 2-1 victory over title-chasing Ayr United. That result means Raith Rovers can now claim the League 1 crown with a win – against Alloa – on Saturday.

MID - Daniel Candeias (Rangers)
The winger was back to his sparkling best as Rangers defeated Hearts 2-1 at Ibrox on Sunday. He created several chances and netted what turned out to be the winning goal.

MID - Craig Sibbald (Falkirk)
The midfielder was at his creative best, sitting behind the forwards as Falkirk ran riot in the second half at Dumbarton. The Bairns netted four goals in that period, with Sibbald getting in on the act in a 5-2 win.

MID - Scott Pittman (Livingston)
Livingston cemented second place in the Ladbrokes Championship table thanks to a 3-0 victory over Brechin City. The division's bottom side made it hard for them  but Pittman's opening goal broke their resolve in the 67th minute and Livi went on to win comfortably.

FC - Sofien Moussa (Dundee)
Dundee moved a step closer to securing their safety with a 2-1 home victory over St Johnstone. Moussa netted both goals, including an 88th-minute winner, as Neil McCann's side moved five points clear of the bottom two with four games to play. He is this week's star man.

FC - Nicky Clark (Dunfermline Athletic)
Deep into stoppage time in Inverness, Allan Johnston's side could feel their destiny slipping from their grasp as ICT led 2-1. Then Nicky Clark popped up with a crucial 95th-minute equaliser, a goal that leaves the Pars effectively requiring just a point to qualify for the play-offs.

FC - Blair Henderson (Annan Athletic)
The big striker bagged a hat-trick against his former club as Annan came from behind to beat Stirling Albion 3-1 at Galabank and leave the Binos still needing a point to make the play-offs. His first goal was a cracker – a superb overhead kick to level the scores – and the second wasn’t bad either!