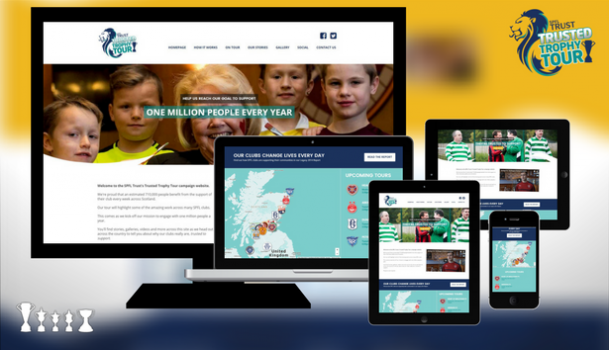 The SPFL Trust has announced its first ever nationwide Trusted Trophy Tour.

Featuring the Ladbrokes Premiership, Championship, League 1 and League 2 along with the Betfred Cup, all five trophies will be taken to a wide range of different clubs.

This forms a campaign to shine a spotlight on the amazing work of SPFL clubs across the country with a number of inspiring programmes set to be featured.

A campaign website, www.trustedtrophytour.co.uk, is now live ahead of the tour’s first top at Hearts on 29 March.
At each stop, invited guests, including local civic and elected leaders, along with media colleagues will be able to learn more about the focused club’s work and the impact it has on its community.

The SPFL Trust and all 42 member clubs enjoyed engagement with an estimated 710,000 people in season 2015/16, according to research conducted on behalf of the SPFL in November 2016. This is the equivalent to around 13% of the Scottish population.

In November, the SPFL Trust launched its Legacy 2014 Report, which documented the work of 40 clubs – including every Ladbrokes Premiership team – following £500,000 of funding.

Delivered as part of the Scottish Government’s programme of legacy following Glasgow’s 2014 Commonwealth Games, clubs were tasked with identifying need in their own local community.

In total, 30,596 people benefitted from support across a range of programmes including:

The SPFL Trust strongly believes that Scottish football can deliver outstanding results for Scotland, with a particular focus on reaching individuals and groups in the hardest to reach sections of society.

A programme has been set up, which will see photography, film, and written, and social content produced by a team of volunteers who will be fully supported, throughout.

Additionally, a volunteer events coordinator will support the management of the project alongside the SPFL Trust’s marketing & communications agency.

SPFL Trust general manager Nicky Reid says: “This is something we’ve been working to put together for the last five months, and we are excited to reveal our plans today. There is so much that our clubs do in their communities, but they are often so busy, it makes telling the stories of their work and its impact is difficult.

“The SPFL Trust felt we can help shine a light on Scottish football as a whole, demonstrating the incredible potential of our clubs and how “trusted” they are to support those who really need it, and so our “Trusted Trophy Tour” was born.

“As well as highlighting the often life-changing work of our clubs, we want to demonstrate the significant impact Scottish football can make as a whole. An estimated 710,000 people are benefiting from engagement in community programmes across the country, and there’s no doubt this can increase significantly in the coming years.

“I’ve no doubt that everyone who follows our tour will be inspired by what they see. This is, undoubtedly, Scottish football at its very best.”

SPFL chief executive Neil Doncaster adds: “We’re pleased to be able to support the SPFL Trust’s “Trusted Trophy Tour”. Our clubs engage in some vital work in their communities, and it’s therefore a wonderful opportunity for us to help bring awareness and attention to the impact that they have on people they support.

“Our clubs have a wonderful record of supporting those in need in and around their communities, and this tour will reiterate that Scottish football is a power for enormous good.”