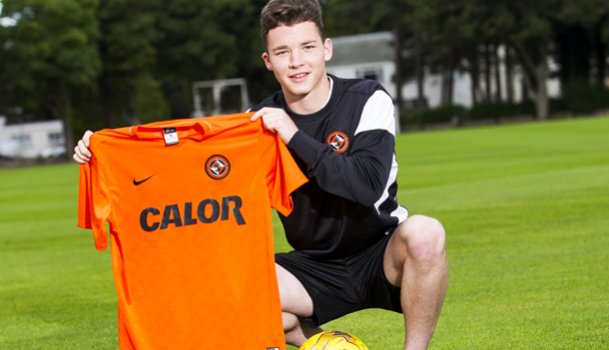 Iain Proudfoot from Youth Football Scotland casts his eye over Dundee United&rsquo;s Ali Coote in the latest in our series on emerging talent.

Iain Proudfoot from Youth Football Scotland casts his eye over Dundee United’s Ali Coote in the latest in our series on emerging talent.

While the focus in recent months has perhaps been on some of the players who have left Dundee United, it is fair to say that Tannadice continues to be at the forefront of youth development.

The ability of the U20 side was demonstrated recently, with the club reaching the quarter-finals of the Little Big Shot Youth Cup at the expense of city rivals Dundee.

While the overall team performance in the 2-1 extra-time victory cannot be ignored, one of the key reasons for the club advancing to the next round was 17-year-old midfielder Coote.

The academy graduate showed good composure in what was a fiercely competitive cup tie and demonstrated a natural ability to fashion openings throughout a tight contest.

In a dynamic display, Coote was unlucky not to get on the scoresheet himself with a free-kick flashing narrowly wide in the first half.

As you would expect from any young midfielder plying his trade in the tangerine half of the city, comparisons are made with former team-mate Ryan Gauld, currently at Sporting Lisbon.

While any thoughts about Coote’s future career path should be left for another day, it is apparent he is held in high regard from those involved in the Scotland set-up – he was in Scott Booth’s squad who lifted the Victory Shield in 2013. More recently, the midfielder was called up to represent his country at the 2015 UEFA European Under-17 Championship in Bulgaria.

In terms of his contract, Coote has a deal with runs until May 2018 and made his first-team debut in a Premiership match with Aberdeen at Pittodrie in April 2015. While most of his playing time this season has been in the Development League, Coote can draw on experience from first-team matches against Celtic and Dundee at the end of last season.

His progress in recent months, along with fellow youth prospects Aaron Duke and Cammy Ballantyne, indicates that Dundee United continue to foster young talent, which is not only of benefit to the club and its fans but also Scottish football as a whole.