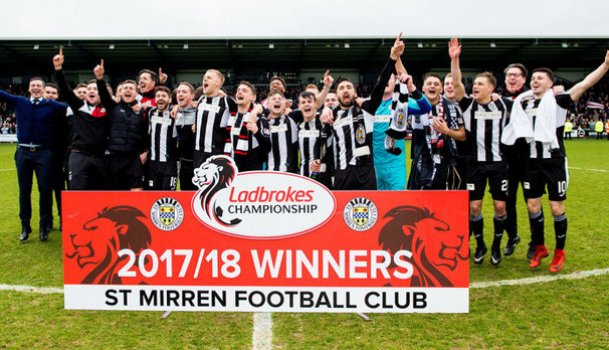 St Mirren sealed the Ladbrokes Championship title with a 0-0 draw against closest challengers Livingston on Saturday.

St Mirren sealed the Ladbrokes Championship title with a 0-0 draw against closest challengers Livingston on Saturday.

A crowd of 6,172 in Paisley saw Jack Ross's side seal a return to the Premiership in 2018/19 after a fantastic season and with three games still to play.

Meanwhile, Lee Ashcroft's early goal set Dunfermline Athletic on their way to a 4-0 win over relegated Brechin City at East End Park to remain third in the table and Dundee United stay fourth after beating Falkirk 1-0 at Tannadice. Morton's play-off hopes were dealt a big blow as they went down 1-0 to Queen of the South at Cappielow while Inverness Caley Thistle thumped Dumbarton 5-1 in the Highland capital, helped by a hat-trick from Nathan Austin.

In the Ladbrokes Premiership's only game today, in-form Kilmarnock made it six wins on the trot with a 2-1 success away to Hamilton Accies.

Ayr United's lead at the top of Ladbrokes League 1 has been cut to two points after they lost 2-1 to Stranraer at Somerset Park while second-placed Raith Rovers beat bottom club Queen's Park 2-0 at Stark's Park.  Arbroath are all but assured of a play-off place after thrashing East Fife 5-0 in Methil and Alloa Athletic are also set for a top-four finish after winning 1-0 at Forfar Athletic. Albion Rovers' losing run continued with a 2-0 reverse away to Airdrieonians, meaning Rovers and Queen's Park cannot now escape the bottom two places.

Montrose stay three points clear in Ladbrokes League 2 after a 1-0 win over Berwick Rangers at Links Park, in a match held up for a long time due to a bad injury to Berwick forward Ouzy See. Peterhead scored late to beat bottom club Cowdenbeath 1-0 at Balmoor and keep their title hopes alive while third-placed Stirling Albion lost 2-1 to Clyde at Broadwood.  Mark Ferry struck in the last minute as Stenhousemuir edged out Annan Athletic 3-2 at Ochilview to stay fourth while Elgin City's play-off hopes were hit by a 1-1 draw with Edinburgh City at Borough Briggs.