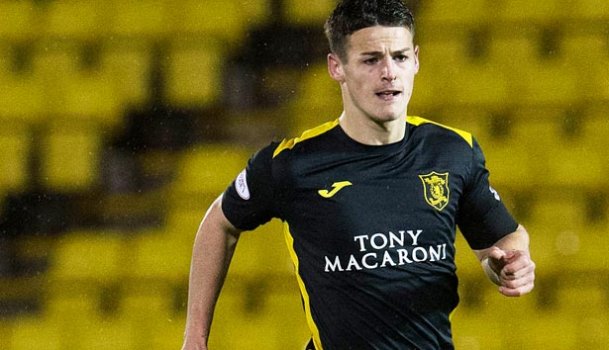 Craig Fowler picks his Team of the Week with Livi striker Danny Mullen singled out for special praise after bagging a double against Airdrieonians.

Craig Fowler picks his SPFL Team of the Week with Livi striker Danny Mullen singled out for special praise after bagging a double against Airdrieonians. He is this week’s star man!

GK - Sean Brennan (Berwick Rangers)
The Wee Rangers shot-stopper was already in contention for a place in the side after he made two great stops in the first half of his side's 3-2 at league leaders Forfar. What secures him the spot ahead of equally deserving contenders Sean Murdoch (Dunfermline) and Allan Fleming (Montrose) is his match-winning penalty save. Brennan repelled David Cox's spot-kick deep into added time to preserve the victory.

DR - Andy Geggan (Dunfermline Athletic)
Solid performance from the midfielder who continues to grow in confidence in his new role of right-back. In truth, the entire back four and goalkeeper, as already mentioned, could have found themselves included after the 1-0 win, which saw the Pars wreck Morton's hopes of going the entire season undefeated at home.

DC - Daryll Meggatt (Ayr United)
The Honest Men picked up a crucial victory this past weekend, beating Dumbarton by a 2-1 scoreline that moved them level with the visitors and four points clear of bottom place St Mirren. Meggat was a rock at the heart of the defence as goals from Farid El Alagui and Robbie Crawford secured the win.

DC - Michael Bolochoweckyj (Montrose)
Forfar stay on top of the League 2 table despite stretching their winless streak to seven games thanks to a surprise 1-0 victory by Montrose at the home of rivals Arbroath. The second-place side were frustrated in their attempts to break down the visitors, with Bolochoweckyj in typically robust form.

DL - Lewis Stevenson (Hibernian)
The long-time club servant put in his usual energetic performance down the left-hand side as Hibernian secured a big victory over Falkirk that all but wraps up the Championship title for Neil Lennon's men.

DM - Marvin Bartley (Hibernian)
We've said it before, when it's a tough, high-tempo game against a dangerous opponent, there are few players you want in your side more than Marvin Bartley. The midfielder was once again a colossus in the centre as Hibs defeated Falkirk thanks to a late James Keatings' goal.

MR - Darren Smith (Stirling Albion)
The attacking midfielder netted twice as Stirling Albion came back to defeat Clyde 3-2 in a thrilling encounter at Broadwood. Having started on the wing, his performance really picked up in the second half when he took up a spot in the middle, notching a double to help continue Stirling's fine recent run.

ML - Dougie Gair (Edinburgh City)
Two goals from the left-footed midfielder,who continually drifted in from the flank to devastating effect against Elgin City. Gair netted the opener and scored the second from the penalty spot as Edinburgh City took a massive step towards survival with the 3-0 win.

AM - Tony Andreu (Dundee United)
The Frenchman was Dundee United's star as the Tangerines lifted the IRN-BRU Cup, beating St Mirren 2-1 at Fir Park. In addition to an excellent opening goal, where the midfielder smacked a first-time volley into the far corner from 20 yards, he acted as the fulcrum for United's passing play.

FC - Ross Stewart (Albion Rovers)
Two goals for the towering striker who continues to impress for the Cliftonhill club, as Darren Young's side got a much-needed victory over Stenhousemuir. Stewart's excellent movement allowed him to net the first two goals in the 3-0 win, which moved Rovers five points clear of their hosts in the relegation battle.

FC - Danny Mullen (Livingston)
A tremendous performance from the striker, who notched two goals and led from the front as Livingston dispatched Airdrieonians by a 4-2 scoreline that, frankly, flattered the visitors. Livingston jumped 11 points clear at the top and are now almost certain to lift the League 1 trophy. Mullen, for his display, is this week's star man.