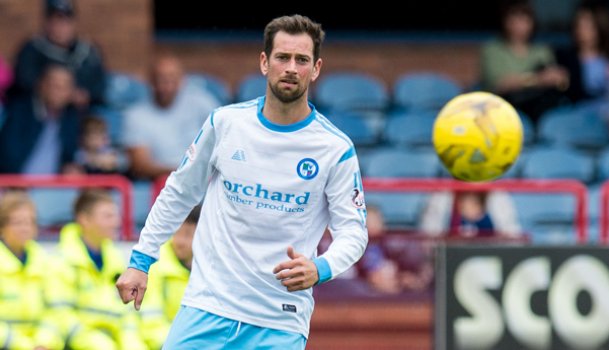 Shaughan McGuigan selects his SPFL Team of the Week, with Gavin Swankie the star man after helping Forfar into the League 1 play-off final.

Shaughan McGuigan selects his SPFL Team of the Week, with Gavin Swankie the star man after helping Forfar into the League 1 play-off final.

GK: Rohan Ferguson (Airdrieonians)
Airdrie failed to make it into the Championship play-off final but it was by the slenderest of margins, as they were eliminated on penalties by Alloa after the two sides drew 1-1 on aggregate. That Mark Wilson’s side made it that far owed much to the performance of goalkeeper Rohan Ferguson, who made some superb stops as Alloa fought back to overcome a 1-0 deficit from the first leg.

RB: Cammy Kerr (Dundee)
Things are becoming a little clearer at the foot of the Premiership table, with the 1-1 draw between Dundee and Ross County enough for the Staggies to confirm their status for another season. It would have taken all three points for Neil McCann’s side to do the same but with the Dee now five clear of Hamilton with two games to play, they’re almost there. Their 21-year-old right back Cammy Kerr impressed once more, with his galloping forward runs a major factor in Dundee snatching a late point from the penalty spot.

LB: Willie Dyer (Brechin City)
It was an extraordinary afternoon at Stark’s Park on Saturday, with six goals, a last-minute equaliser, drama in extra-time and the tense conclusion of a penalty shoot-out. Brechin City eventually emerged victorious after a two-legged ding-dong which ended 4-4 on aggregate, but they were pushed hard by a Raith side desperate to hold on to their Championship status. It was a heroic effort from everyone in red, although Willie Dyer takes the TOTW’s left-back spot, after an excellent afternoon, which not only involved keeping Raith’s chances to a premium, but also an assist for Brechin’s second goal.

CH: Clint Hill (Rangers)
It appeared at one stage that the Rangers v Hearts match could be put to bed halfway through the first period, with the Ibrox side a goal up and Hearts down to 10 men after Prince Buaben was handed a straight red card for a foul on Josh Windass. However, a second half full of attacking vim from Ian Cathro’s men saw Rangers digging in to eventually take all three points with a 2-1 win. Clint Hill did as much as anyone to secure those points, with a fine man-of-the-match performance at the heart of the defence alongside David Bates, as Rangers secured third spot.

CH: Liam Gordon (Peterhead)
Peterhead only survived by the skin of their teeth on the last day of the season, jumping up to ninth as Stenhousemuir bowed out from League 1, but they’re making a strong attempt at staying in the third tier. They went into the second leg of their play-off semi-final with Montrose tied at 1-1 but they progressed in a reasonably straightforward manner with a 3-0 victory, thanks in part to a dominant performance from defender Liam Gordon. The 21-year-old has impressed since joining on loan from St Johnstone and was a stand-out again as the Blue Toon advanced to the final to face Forfar Athletic.

RM: Iain Flannigan (Alloa Athletic)
Jim Goodwin’s Alloa Athletic side are just two games away from an immediate return to the second tier, thanks to a nail-biting penalty shoot-out win over Airdrieonians. 1-0 down from the first leg, they restored parity through Jon Robertson’s excellent second-half strike and the Wasps eventually headed through 4-3 on penalties. Iain Flannigan has been a mainstay of this Alloa side for four seasons now and he was at his beguiling best again on Saturday, with his midfield performance a big part of their victory.

CM: Danny Swanson (St Johnstone)
St Johnstone got the win they required to guarantee European football for the fifth time in six seasons with a 1-0 victory over Partick Thistle but it was a player who won’t be embarking on a European odyssey with them, who helped bring it about. Danny Swanson grabbed his 15th goal of a productive campaign from the penalty spot in the 33rd minute but he again demonstrated the type of form which convinced Hibernian to sign him on a pre-contract deal. Tommy Wright may find the former Berwick, Dundee United and Hearts player is a difficult man to replace next term.

LW: Jordan Jones (Kilmarnock)
Kilmarnock have looked upwardly mobile since Lee McCulloch took the managerial reins in February and they picked up the win which confirmed their place in the top tier - 2-1 over Inverness Caley Thistle. Part of their resurgence has been down to the upturn in performances of Jordan Jones, and he was at it again on Saturday, with his third goal in just five games, helping to clinch the three points against Richie Foran's outfit.

FC: Leigh Griffiths (Celtic)
There was a reasonable amount of weight behind the theory that Aberdeen could be the first Scottish side to beat Celtic on Friday evening. It didn’t last long though. Eleven minutes to be precise, which was all it took for Celtic to race into a 3-0 lead, before eventually seeing out the game 3-1. Leigh Griffiths was involved in all of Celtic’s goals, with his corner being nodded home by Dedryck Boyata, while his nutmeg on Mark Reynolds started the move for Stuart Armstrong’s effort. He saved his best for last, though, lashing the ball past Joe Lewis as Celtic moved 30 points clear of the Dons.

FC: Gavin Swankie (Forfar Athletic)
Gavin Swankie may be entering the twilight stage of his career but he rolled back the years as Forfar made it through to the League 1 play-off final. The Loons did well to come back from 2-0 down to draw the first leg 2-2 and they picked up where they left off on Saturday, racking up a 3-0 first-half lead, before eventually winning 4-2. Swankie was instrumental in the win, with two goals and an assist, as Gary Bollan's men booked a final berth against Peterhead.