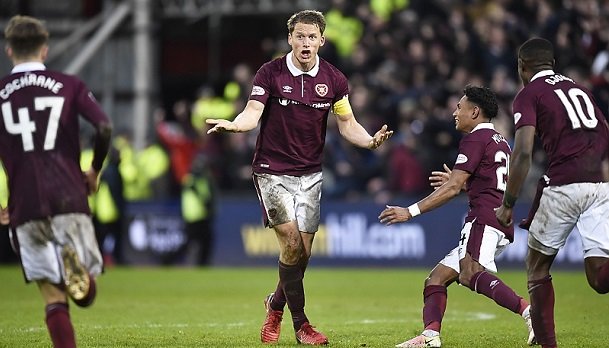 Craig Fowler selects his SPFL Team of the Week, with Heart of Midlothian skipper Christophe Berra star man for his Edinburgh derby display.

Craig Fowler selects his SPFL Team of the Week, with Heart of Midlothian skipper Christophe Berra star man for his Edinburgh derby display.

GK - Ofir Marciano (Hibernian)
His side may have exited the Scottish Cup after a 1-0 loss at Tynecastle but the Israeli keeper still managed to impress, making a terrific one-handed denial of Demetri Mitchell (more on him later) midway through the second half.

DC - Christophe Berra (Hearts)
‘A colossus’ was the manner in which most pundits described the performance of the Hearts captain at Tynecastle. He wasn't just dominant at the back, he also rose highest to power a late header towards the Hibs goal, where Don Cowie's vital touch helped the ball spin away from John McGinn and over the line. He is this week's star man.

DC - Coll Donaldson (Inverness Caley Thistle)
The centre-back continued his rejuvenation in the Highlands with a mightily impressive performance in the 2-2 draw with Dundee. At the ground of his former club's main rivals, Donaldson aided John Robertson's side in securing a replay.

DC - Kieran Tierney (Celtic)
Celtic made quick work of Brechin City at Parkhead, scoring before the visitors had even touched the ball and adding another after just 10 minutes. Many players shone in the 5-0 victory, including Tierney who was his usual dangerous self down the left.

MR - Rory McKenzie (Kilmarnock)
Coming back into the side after missing Killie's last match before the winter break, McKenzie would help Steve Clarke's men advance after winning an 88th minute penalty, from which Lee Erwin blasted them into the next round. Other than that contribution, McKenzie impressed with his energy in the midfield area.

MC - Gary Harkins (Morton)
The veteran midfielder's excellent season continued as he pulled the strings in Morton's 2-1 victory over Dunfermline at East End Park. A favourable home draw against either Dumbarton or Peterhead will see the Ton have an excellent opportunity to reach the last eight.

ML - Demetri Mitchell (Hearts)
The second Hearts player to go on this list. Everyone may have been talking about Steven Naismith before the game, but it was the young loanee from Manchester United who stole the show. Playing in the wing-back position, Mitchell was an absolute terror down the left and caused Hibs all sorts of problems.

FC - Craig Tanner (Motherwell)
The playmaker stood out as Motherwell enacted some revenge for the 3-1 loss to Hamilton Accies in their last game before the winter break, winning 2-0 and advancing to the next round of the Scottish Cup. Tanner was even able to get on the scoresheet, netting his side's second from the penalty spot.

FC - Conor Sammon (Partick Thistle)
The on-loan Hearts striker scored both goals as Partick Thistle came through a tricky tie at Palmerston to claim a 2-1 win in the Scottish Cup – they now face holders Celtic in the last 16.