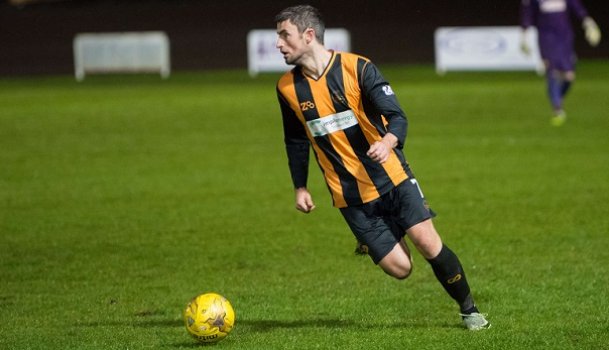 Craig Fowler selects his SPFL Team of the Week, with Steven Thomson of Berwick Rangers the star man after scoring a hat-trick against Annan.

Craig Fowler selects his SPFL Team of the Week, with Steven Thomson of Berwick Rangers the star man after scoring a hat-trick against Annan.

GK - Scott Fox (Ross County)
The County shot-stopper made three terrific saves in his side's 1-1 draw at Ibrox on Saturday. The pick of the bunch came with the game still goalless, as he somehow managed to tip James Tavernier's effort over the bar despite it taking a wicked deflection.

DR - Scott Robertson (Stranraer)
Struggling Stranraer earned themselves a massive win in the League 1 relegation battle by defeating Albion Rovers 3-0 at Stair Park. It was the Blues' first win under new boss Stevie Farrell and kept them within touching distance of Stenhousemuir in ninth. In a team full of good performances, Robertson is included for a tireless shift on the right of the defence.

DC - Simon Mensing (Airdrieonians)
The former Hamilton and Clyde veteran was a recent signing by the League 1 club and, if his performance in the victory over Peterhead is anything to go by, he should be a useful addition. Mensing played the role of leader and organiser at the back as Airdrie came back from a 1-0 half-time deficit to win 4-1.

DC - Paul Watson (Falkirk)
Both centre-backs had excellent showings for Falkirk in their 2-0 victory over rivals Dunfermline but, seeing as Peter Grant is something of a favourite in Team of the Week, we've opted for his partner on this occasion. The Bairns have won three of their last four, going unbeaten in that time, and jumped back over Morton into third place in the Ladbrokes Championship table.

DL - Paul Dixon (Dundee United)
The left-back showed off his attacking prowess by providing two assists on Saturday evening as Dundee United got back to winning ways with a 3-0 victory over Raith Rovers. His team-mate Thomas Mikkelsen could feel hard done by to be left out of this week's team, but as you'll find out, there was plenty of competition in the forward positions.

MC - Alexandros Tziolis (Hearts)
The 62-times capped Greek international is already a firm favourite with the Hearts fans after a classy display in his full debut, as the visitors won 3-0 at Fir Park. Though the midfielder scored the first, he showed his true worth at the second goal, taking control of a counter attack and releasing a team-mate down the right, sparking the move which would end with Esmael Goncalves putting the match to bed.

MC - Ryan Jack (Aberdeen)
Whether in midfield or at the heart of a back three after a formation change, Jack was Aberdeen's star performer at the weekend as the Dons managed to overcome Partick Thistle and move themselves back up into second place in the Premiership table.

MC - Kyle Jacobs (Queen of the South)
Queens bounced back from the disappointment of losing to Hibs last weekend with a thoroughly impressive 3-0 defeat of a Morton team that came into the match with a seven-game unbeaten run. Jacobs was the star man in midfield, scoring with a terrific effort to put his side 2-0 up before playing his part in the game-sealing third goal.

FC - Esmael Goncalves (Hearts)
Tony Watt and Conor Sammon exited Tynecastle during the January transfer window, while Esmael Goncalves and Dylan Bikey took their place in the Hearts striking corps. While the latter is still awaiting his debut, it already looks like a good bit of wheeling and dealing as Goncalves turned in an excellent performance in the 3-0 win at Motherwell. His two late goals means he's already equalled the tally from Watt and Sammon.

FC - Moussa Dembele (Celtic)
The striker returned after missing a few games through injury and immediately showed Celtic exactly what his worth to the team was. The visitors were trailing St Johnstone 2-1 and, though they benefited from a contentious penalty, there's no taking away from Dembele's impact as he struck a treble in 20 minutes to leave with the match ball and keep Celtic's winning run going.

FC - Steven Thomson (Berwick Rangers)
The Berwick Rangers forward gets the star man nod ahead of Dembele because he netted all three of his goals from open play in the 4-1 win over Annan. Also, while Dembele's hat-trick sealer was a terrific team goal, in terms of individual merits nothing can top the goal that earned Thomson the match ball. He struck from the corner of the penalty area and arrowed a magnificent effort across goal and into the top corner.