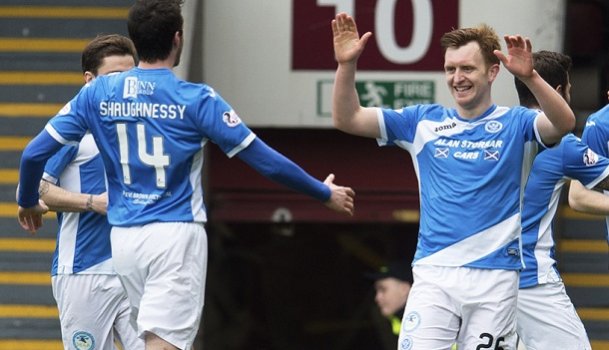 Craig Fowler selects his latest SPFL Team of the Week, with St Johnstone midfielder Liam Craig the star man for his performance against Motherwell.

Craig Fowler selects his latest SPFL Team of the Week, with St Johnstone midfielder Liam Craig the star man for his performance against Motherwell.

GK - Derek Gaston (Morton)
The Morton shot-stopper made a terrific save to deny John Baird an opener for Falkirk, which would have flipped the direction of the match. Instead, Morton would go on to secure an important three points when Kudus Oyenuga netted a late header. The Ton moved level on points with Falkirk and trail leaders Hibs by seven points with a game in hand.

DR - Shay Logan (Aberdeen)
The right-back got up and down the flank effectively all game against a lacklustre Hearts, including ghosting into the penalty area to nod his side in front. While he got plaudits for his attacking play in the 2-0 win, he also saved his side in defence, putting in a vital last-ditch challenge to deny Esmael Goncalves a clear sight at goal before Aberdeen took the lead.

DC - Matty Allan (Montrose)
The on-loan Dundee United youngster returned to the centre of the Gable Endies’ defence and produced a stellar showing in his side's 2-0 victory away to Cowdenbeath. With the Blue Brazil threatening a revival, with four points collected from their previous two games, this was a good win for Montrose, who are now well and truly clear of the threat of relegation.

DC - Thomas O'Ware (Morton)
The centre-back was in inspired form during Morton's victory at Falkirk, winning everything in the air and routinely out-muscling the opposing strikers. Even if neither Morton or Falkirk can catch Hibs, it could still be a massive advantage for the play-offs for whoever finishes in second place.

DL - Bryan Hodge (Arbroath)
The natural midfielder tucked into full-back for the trip to Berwick Rangers as Arbroath moved closer to the League 2 summit with a 2-0 away win. Hodge was tremendous in his unfamiliar role patrolling the left flank, with Dick Campbell's men cutting the gap to just one point on rivals Forfar at the top.

MR - Chris Johnson (Raith Rovers)
John Hughes' side moved up a place into seventh and five points clear of automatic relegation thanks to this 2-1 win over a struggling Dundee United side. The ex-Kilmarnock winger had his best game for the Kirkcaldy side, as goals from Craig Barr and Ryan Hardie secured the crucial victory.

MC - Liam Craig (St Johnstone)
St Johnstone were a little fortuitous in their win over Motherwell, as the hosts passed up a few chances to take something from the game, but there can be no complaints that Craig deserved to be on the winning side. The midfielder covered every blade of grass, helping out in defence and attack, including netting the winning goal. On the Saints’ fans forum he was the unanimous winner of the man-of-the-match award. You don't see that every week. For all those reasons already mentioned, he is this week's star man.

MC - Kyle Hutton (Airdrieonians)
It's not been a great 2017 for Airdrie so far, but Saturday's 1-0 win over Stenhousemuir moved them back level on points with Brechin for the final play-off place. Hutton was the game's man of the match, pulling the strings in the centre of the park.

MC - Kenny McLean (Aberdeen)
Omitted from the Scotland squad last week, McLean went about proving a point in Aberdeen's 2-0 win over Hearts. Continuing on from his recent fine form, the central midfielder was the best player on the park. His pressing set the tone for Aberdeen, while his playmaking skills contributed to a home attack that threatened every time they ventured forward.

ML - Lewis Morgan (St Mirren)
Morgan terrorised the Queen of the South defence as Saints picked up another victory as their remarkable resurgence continues. They are now only one point from ninth place and four points from safety. Against Queens, the result was secured when Morgan won a second-half penalty from which Rory Loy would put them 2-0 ahead.

FC - Martyn Waghorn (Rangers)
Pedro Caixinha's first match as Rangers manager could scarcely have gone any better as they easily defeated Hamilton at Ibrox. Starting alongside Kenny Miller in a 4-4-2, Waghorn had his best game in months, using both his movement and strong frame to dominate the Accies backline. He would score one and set up another in the 4-0 triumph.