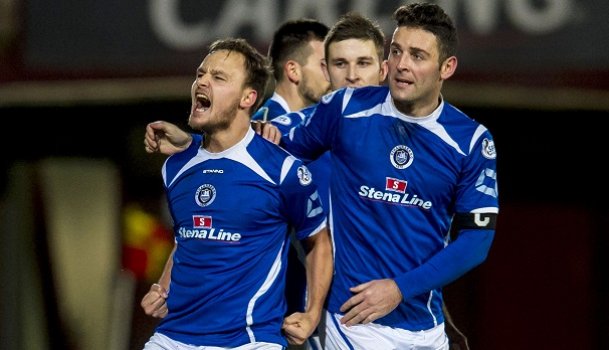 Craig Telfer, from the website Tell Him He&rsquo;s Pele, casts a look at how things are shaping up outside the Premiership in his latest blog.

Craig Telfer, from the website Tell Him He’s Pele, casts a look at how things are shaping up outside the Premiership in his latest blog.

The current SPFL campaign has been full of surprises and a number of teams in the three lower divisions have punched above their weight.

Their ability to perform above expectation has brought an excitement and vibrancy to the leagues - can they keep it up for the remainder of the year?

The Championship is probably playing out as predicted – Heart of Midlothian, Rangers and Hibernian make up the top three – but Queen of the South have threatened to gatecrash the triumvirate.

The Doonhamers currently occupy fourth place (a position they might have expected to find themselves come the end of the year) and, until the weekend’s home defeat to Cowdenbeath, they seemed capable of troubling a Rangers side in second.

They had collected 17 points from their previous eight matches, winning five and drawing two (the only defeat in this period came against Hearts). Their run began with one of the games of the season, a rambunctious 4-3 win at Raith Rovers, while Falkirk and Dumbarton were both dismissed by comfortable 3-0 scorelines.

The high point of the season so far has been the impressive 2-0 victory over Rangers at Palmerston, where Kevin Holt’s swirling free-kick and Gavin Reilly’s tremendous control and finish handed them the win.

James Fowler deserves credit for the manner in which he has smoothly assimilated into the manager’s role after replacing Jim McIntyre. He has some excellent players at his disposal – alongside Holt and Reilly, Mark Durnan, Ian McShane, Danny Carmichael and Iain Russell have all excelled at points over the year. The weekend’s defeat to Cowdenbeath was a setback but forthcoming matches against Alloa Athletic, Livingston and Raith Rovers should allow them to keep pace with the sides above them.

Who could have imagined that Stranraer would top League 1 at Christmas? The Blues were projected to have a decent season, perhaps repeating last term’s play-off achievements, but they have exceeded expectations so far. If we’ve learned anything over the past six months, it’s that this side should not be underestimated.

Stranraer have pieced together one of the most remarkable unbeaten sequences in this year’s SPFL – since their narrow defeat to Dunfermline Athletic at the end of August, they’ve gone 13 matches without losing, taking 31 points in the process. It is an excellent accomplishment and testament to the hard work of Stevie Aitken and his players.

Having lost key personnel such as Mark Docherty, Andy Stirling and Martin Grehan over the summer, there was a concern that consecutive top-four finishes would be beyond them but Aitken has successfully replaced them (and, in some cases, upgraded them, with the returning Craig Malcolm enjoying a stellar campaign) and integrated them into his high-tempo, short-passing approach. After a slow start, Stranraer have become one of the division’s most eye-catching teams.

Aitken will no doubt take most of the applause (and will surely be considered whenever any vacancies arise in the Premiership and the Championship) but the manager is only as good as his players.

Jackson Longridge is performing well at left-back (and, along with goalkeeper David Mitchell, has apparently attracted the interest of Hibernian), Grant Gallagher, Chris Aitken, Willie Gibson and Stevie Bell provide creativity and ballast in the middle of the park and Jamie Longworth has complemented Malcolm in attack.

Forfar Athletic will offer solid competition and Dunfermline should improve over the New Year but Stranraer have the quality to win the division. Their part-time status should not be a hindrance – they are more than capable.

The surprise packages in League 2 have been covered in these blogs before but it is worth looking over Arbroath and Queen’s Park once again. Allan Moore’s side were considered a decent shout to compete for a play-off place but top the division and have sat at its summit for all but two weeks of the season.

There have been tumults along the way – consecutive defeats to Queen’s Park and Albion Rovers brought their position under scrutiny – but four wins from their last five games has consolidated their status. A number of players have shone but strikers Simon Murray and Paul McManus have stood out – the pair have scored 29 goals between them in all competitions.

Queen’s Park, five points behind the Smokies in second place, have continued their superb run of form. Ten wins and two draws in their last 13 games has seen them collect 32 points (the greatest total in the league over the period) and they have surely cemented their place within the play-off positions at least for the remainder of the season.

At their best, Gus MacPherson’s side are a fluid, fluent proposition and able to take on the best sides in the league - even when they’re not, they’re still capable of winning.

Their players – many of whom arrived in the summer with no experience of senior football, lest we forget – continue to adapt and harden to the demands of the division. Perhaps most encouraging of all is their return to Hampden in January – after their year-long exile in Airdrie, the second half of the season should be exciting.