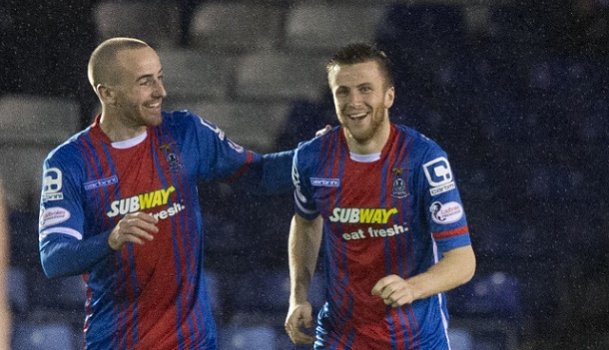 Craig Cairns takes his latest tactical look at the SPFL, with the focus this week on Inverness Caley Thistle, Falkirk and Dundee.

Craig Cairns takes his latest tactical look at the SPFL, with the focus this week on Inverness Caley Thistle, Falkirk and Dundee.

Liam Polworth stepping up in the absence of Ryan Christie
Due to an injury to their talisman Ryan Christie - who is set to be recalled by Celtic before he recovers - Inverness are looking for others to step up and become the main creative spark in midfield. 21-year-old Liam Polworth has been given an extended run recently, starting the last 11.

Polworth’s well-placed volley against Dundee United was his first goal of the season but he has been heavily involved in Inverness’ attacks in recent weeks, bagging an assist in each of their two previous fixtures. On Saturday he also created a great chance with the score at 1-1 – robbing Gavin Gunning and driving into the box but none of his team-mates were there to finish.

Caley Thistle now line up in a narrow 4-3-2-1, with Polworth placed on the right of the central midfield three. From here he aids his full-back when defending and maintains a reserved position when his side have possession, allowing his right-back to overlap and attack the wide area. When ICT go forward, he is more inclined to stay in a central position and move towards the edge of the box, making late runs where appropriate – which is exactly how his goal came about.

As we know, John Hughes likes his side to build from the back, keeping the ball on the ground. Polworth’s strike was ICT’s first league goal this season to be assisted by a high cross from open play. Their second also came from a high cross and was also supplied by Danny Williams.

One of Caley Thistle’s issues this season has been the amount of late goals they have conceded. They have shipped six goals in the last minute and beyond, costing them eight points. Lewis Horner’s late equaliser on Saturday is the first late goal this season they have scored to rescue any points.

Falkirk take advantage of Rangers’ high line
Falkirk lined up with the same XI that almost left Easter Road with a victory the previous week, with 17-year-old Kevin O’Hara just off John Baird in a 4-4-2. Mark Warburton preferred Danny Wilson to Dominic Ball and Nathan Oduwa to Kenny Miller. Dean Shiels was brought in after injury to Gedion Zelalem.

A penalty in the first few minutes gave Falkirk the lead but the build up to it was a pattern repeated throughout the match. James Tavernier was caught out of position – on this occasion a central attacking area – and, once in possession, Falkirk quickly moved the ball forward. Will Vaulks got behind the Rangers defence and Wilson was forced to bring him down.

Naturally, the home side retreated and allowed Rangers possession. Other than the equaliser, they kept chances to a minimum and were unlucky not to take the lead again before half-time. This time a long ball over the top found O’Hara - on this occasion he turned Rob Kiernan and his goal-bound strike was tapped in by an offside Baird.

The majority of Falkirk’s chances followed a similar pattern - Rangers pushed their defence up to halfway with Tavernier moving towards the opposition box; Falkirk won possession and quickly played the ball forward for their front two to chase; Rob Kiernan came to defend one-on-one in the right-back area, leaving Wilson to defend the centre himself.

One of these led to a corner from which Falkirk scored the winner. Vaulks, who had a tremendous match, escaped the attention of Shiels to strike the ball home. Much of the victory was down to a sensational final 20 minutes from Danny Rogers in the Falkirk goal – including an injury-time penalty save. But Falkirk should be credited for the way they continually stretched and exposed the Rangers defence.

Dundee’s front three continue to produce the goods
Dundee started the season with a thumping 4-0 victory at Rugby Park, scoring two first-half goals and one shortly after the break. A few weeks later they knocked in two early goals against St Johnstone, going on to take all three points in that match as well. By that point their front three - Greg Stewart, Rory Loy and Kane Hemmings - had all scored at least two goals each.

They have since struggled to score in the first half of matches and did so in just two of their next 15 outings. On Saturday, however, they blitzed Hamilton Accies and led 4-0 by half-time. In doing so, they increased the amount of first-half goals they have scored all season by 50%.

Three came from Hemmings as he netted just the second Ladbrokes Premiership hat-trick of the season. The other was achieved by St Johnstone’s Steven MacLean and also came against Accies. Hemmings’ hat-trick is his first since he fired three past Morton for Cowdenbeath in 2013 and makes him Dundee’s top goalscorer with nine.

He is closely followed by Loy on seven and Stewart – who at the weekend scored his first goal since September – with six. All in all, the trio have scored 22 of Dundee’s 28 goals in all competitions. Five goals have come from defence and one from midfield.