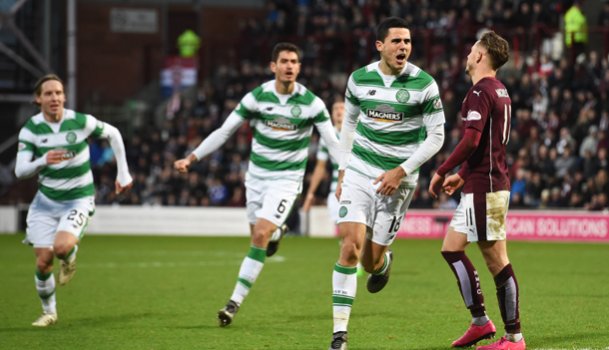 Craig Cairns takes his latest tactical look at the SPFL, with the focus this week on Tom Rogic, Jason Holt and Josh Magennis.

Craig Cairns takes his latest tactical look at the SPFL, with the focus this week on Tom Rogic, Jason Holt and Josh Magennis.

Rogic simple but effective in the No 10 role for Celtic
Celtic were without Scott Brown and Leigh Griffiths for the visit to Tynecastle on Sunday and lined up with Callum McGregor, Tom Rogic and Stuart Armstrong behind Nadir Ciftci in attack. The away side struggled to create many clear-cut opportunities but had Rogic to thank for once again putting in a huge performance.

Rogic has now scored five goals and chalked up four assists in the league this season and managed a goal in the League Cup victory at Tynecastle. Typically used as a No 10, Rogic possesses attributes not typically associated with how this role is traditionally played. Last season it was the nippy Stefan Johansen who played there, linking expertly with those around him.

This season Johansen has been required in a deeper role, including for this match, and Rogic has often stepped in to fill the position just behind the striker. Though there is nothing flashy about the Australian international on the ball, he is big, powerful and technically proficient. His game intelligence guides his use of the ball and he is more inclined to play short, simple passes than to do anything over indulgent.

He has some strike on him, too. On Sunday he followed up his potent long-range effort versus Ross County in November with a beautifully-placed shot that clipped the bar on the way in. He had played his part in the build-up to the goal as well, slipping a quick one-touch pass to Mikael Lustig before lingering at the edge of the area, waiting to pounce. That finish would have been the winner had it not been for an equally impressive injury-time effort from Osman Sow.

Jason Holt takes advantage of the space between the lines to fire Rangers to victory
The key man in Rangers’ impressive victory over main title challengers Hibernian was undoubtedly Jason Holt, who has flourished in the midfield of Mark Warburton’s 4-1-2-3 this season. This match saw him line up against a compact Hibs side, who started with Liam Henderson and John McGinn on the sides of a narrow 4-4-2.

Rangers like to attack down the flanks, creating triangles with their formation. Initially, they struggled to break down Hibernian, who shielded those areas by having two midfielders come out to protect their full-backs when Rangers attempted to get down the sides. One of the two strikers would then drop into midfield to compensate.

This kept Warburton’s side quiet for a large part of the first half and it took a quick counter attack to draw level. Fraser Fyvie gave the ball away as Hibs tried to break from their own half and James Tavernier and Martyn Waghorn combined to set-up Holt. It was the first time Rangers had caught the Hibs rearguard out of position and they were ruthless in capitalising on it.

With the visitors continuing to commit one of their central midfielders wide while defending, gaps inevitably started opening up in the centre. Holt has dominated many matches this season through his work in the area between the defensive and midfield lines. He appeared from nowhere over the shoulder of Henderson before turning with the ball and putting his side ahead via a deflection.

Rangers’ two substitutes later combined to all but finish the game off, again quickly taking advantage of winning possession high up the pitch, before Waghorn scored a direct solo goal late on. However, Holt was the constant thorn in Hibernian’s side for the entire 90 minutes and had already done much of the damage before that with his eighth and ninth goals of the season.

Magennis restored to more effective role as centre-forward
Even though he scuffed his finish for the Boxing Day winner at New Douglas Park, Tope Obadeyi had an earlier effort saved well by Michael McGovern and had threatened the Hamilton defence on a number of occasions. He also put in his defensive shift, as Gary Locke’s men attempted to hit their opponents on the break. Nineteen year-old Adam Frizzell - making his first start - played just off the striker and provided pace and clever touches when his side attacked.

Frizzell stuck to his defensive duties too, tracking back as far as his own penalty area when required. The defensive performance was a key part to this Kilmarnock victory, though they were still required to resort to some last-gasp defending when the likes of Dougie Imrie and Ali Crawford broke forward. Their third clean sheet of the season helped secure all three points for the first time in eight matches.

Another key component of the victory – which takes them 10 points ahead of Dundee United – was the performance of Josh Magennis. Even though not one of his best, he has matured into the main attacking threat for Kilmarnock over the last year and in this gritty win he yet again stood out.

The right side of attack has suited Magennis in the past but it is at centre-forward where he has thrived. He was moved back there for this match and most of Killie’s play was directed through him - whether playing direct for him to hold up or else getting their wingers on the ball and aiming crosses at the Northern Ireland international.

Magennis also dropped deep and wide effectively, taking the ball in and powering past opponents. He could have scored with a volley had it not been for another save from McGovern and contributed heavily to the winner - feigning a first-time cross before dinking the ball into the centre for Obadeyi to finish.

Even though their match against Ross County last night ended in a 3-2 defeat, Magennis again started up front and responded by assisting Obadeyi once more before scoring a brilliant second goal. Magennis now has eight goals and four assists this season.