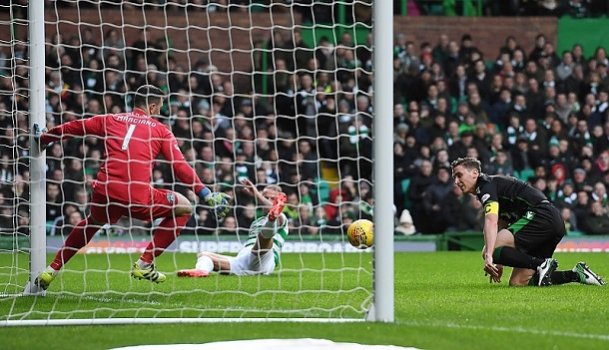 Resident statto @splstats looks at some of the numbers behind the weekend games across all four divisions of the SPFL.

Resident statto @splstats looks at some of the numbers behind the weekend games across all four divisions of the SPFL.

41 – Celtic defeated Hibernian 1-0 at Celtic Park to remain 11 points clear at the top of the Ladbrokes Premiership and extend their unbeaten home run in the league to 41 matches. Their last home Premiership defeat came in December 2015 when a Louis Moult double handed Motherwell a 2-1 win. Since January 2016, Celtic have picked up 33 wins and eight draws at home in the Premiership. Brendan Rodgers’ side still have some way to go to break the club record of 53 home league games without defeat, set by Martin O’Neill’s team in the early 2000s, and a little further to go to match Motherwell’s Scottish League record of 60 home league games without losing, set in between 1929 and 1932.

17 – Aberdeen bounced back from their midweek loss to Rangers by beating Kilmarnock 3-1 at Pittodrie in the Ladbrokes Premiership. The Dons trailed 1-0 at half-time but three second-half goals, including a stunning Scott McKenna strike, handed them three crucial points. Derek McInnes’ side are now unbeaten in their last 17 matches against Killie, a run which stretches back over five years. Killie’s last victory over Aberdeen was a 2-0 success at Pittodrie in December 2012, when Craig Brown was still in charge of the Dons.

3 – Queen of the South are firmly in promotion play-off contention in the Ladbrokes Championship following their 3-1 victory over Brechin City at Palmerston. Not for the first time this season, the Doonhamers had Stephen Dobbie to thank for their victory – the talismanic forward scored all three of their goals. The 35 year-old has now netted 23 goals this season, matching his best ever tally set in the final season of his first spell in Dumfries in 2008/09. Saturday’s treble was Dobbie’s third of the season – prior to this campaign he had only netted three hat-tricks in his entire career.

94 – Ayr United returned to the top of Ladbrokes League 1 thanks to a 4-1 victory over Queen’s Park at Hampden. The Honest Men have been in scintillating goalscoring form this season, notching an astonishing 94 goals in their 31 matches in all competitions. This is already Ayr’s highest-scoring campaign since the 1987/88 vintage racked up 106 goals in all competitions on their way to winning the Second Division title. With a minimum of 14 matches remaining this season, Ian McCall’s side look extremely likely to surpass that tally. However, they will have to up their already impressive scoring rate if they want to break their club record of 139 goals in a season, set back in 1958/59.

4 – Montrose came from behind to beat Stirling Albion 2-1 at Links Park to move four points clear at the top of Ladbrokes League 2. The Gable Endies have lost just two of their last 16 league matches, and seem intent on keeping up the pressure on second-placed Peterhead, who have three games in hand. Saturday’s win ended a bit of a home hoodoo for Montrose against the Binos – they had previously gone eight matches without a win over Stirling Albion at Links Park, with their previous victory 3-2 back in December 2012.