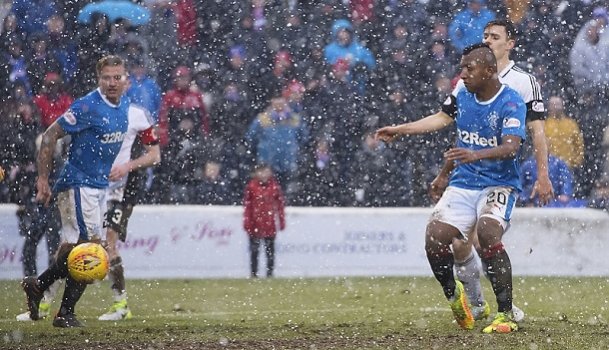 Resident statto @splstats looks at some of the numbers behind the weekend games in the SPFL and the Scottish Cup.

Resident statto @splstats looks at some of the numbers behind the weekend games in the SPFL and the Scottish Cup.

23 – Rangers moved into the Scottish Cup quarter-finals thanks to a 6-1 victory over Ayr United at Somerset Park. The Light Blues scored six goals away from home for the first time since a 6-0 victory over Dumbarton in January 2016. The victory extended The Gers’ unbeaten sequence against The Honest Men to 23 matches in all competitions - 20 wins and three draws. Ayr’s last win against Rangers came back in October 1975, when goals from Davie McCulloch, Alex Ingram and Johnny Graham handed them a 3-0 victory at Somerset Park.

3 – Celtic defeated Partick Thistle 3-2 at Parkhead to progress to the quarter-finals of the Scottish Cup. James Forrest was the hero for Brendan Rodgers’ side, scoring his first career hat-trick to take his tally for the season to 16 goals. Forrest is just the third Scottish player to net a hat-trick for The Hoops in the last decade, joining Leigh Griffiths and Kris Commons.  Celtic extended their unbeaten run against The Jags to 30 matches in all competitions, with Thistle’s last win against their Glasgow rivals coming at Hampden in May 1995, when a Wayne Foster double and a goal from Roddy Grant helped them to a 3-1 victory.

4 – Morton defeated Dumbarton 3-0 at Cappielow to move into the Scottish Cup quarter-finals for just the second time since 2000. The Ton and The Sons have been drawn together in the Scottish Cup on four occasions and the Greenock side have won all four ties. Jim Duffy’s side have recorded four consecutive victories in all competitions for the first time since January last year.

10 – Queen’s Park climbed off the bottom of Ladbrokes League 1 thanks to a 2-0 victory at East Fife. The Spiders continued their domination of the Fifers in recent meetings – they are now unbeaten in their last 10 matches against East Fife, picking up seven wins and three draws. It was Queen’s Park’s first win of 2018, and it saw them move up to ninth, ahead of Forfar Athletic on goal difference, and just a point behind Albion Rovers. If Gus MacPherson’s side do survive, it is likely to be their away form which saves them – this was their fifth league victory of the season and four of them have come on the road.

4 – Clyde beat Berwick Rangers 1-0 at Shielfield to climb to seventh place in Ladbrokes League 2. The Bully Wee won just three of their first 18 matches but have now recorded four consecutive victories to move themselves well clear of relegation trouble. Former Scotland striker David Goodwillie has scored in each of those four victories to take his tally to 14 league goals for the season.