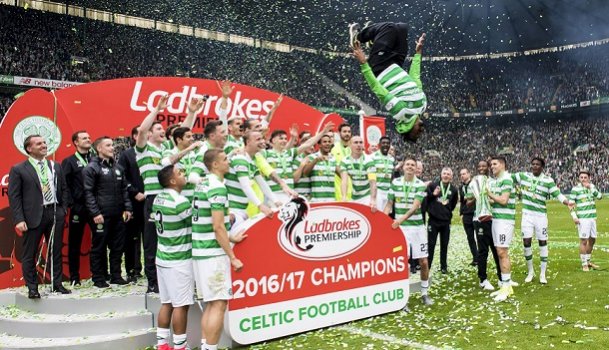 Resident statto @splstats looks at some of the numbers behind the weekend games, including Celtic, Aberdeen and Dundee United.

Resident statto @splstats looks at some of the numbers behind the weekend games, including Celtic, Aberdeen and Dundee United.

0 – Celtic defeated Heart of Midlothian 2-0 at Celtic Park to complete the Ladbrokes Premiership campaign unbeaten. This season’s Bhoys became just the third team ever to achieve this feat in the top flight, with both previous occasions coming over a century ago. Celtic were the first team to manage it, back in 1897/98, and rivals Rangers followed that up by completing a perfect season in 1898/99, but in both cases the season lasted just 18 matches rather than the current 38.  Amazingly, three of the Celtic squad were achieving this feat for the second time. Mikael Lustig was part of the Rosenborg side which completed an unbeaten season in 2010, Jozo Simunovic did it with Dinamo Zagreb in 2014/15 and Kolo Toure achieved it with Arsenal in 2003/04. The Bhoys have the chance to complete a treble on Saturday when they face Aberdeen in the Scottish Cup final – if they win the cup they will become the first ever side to go unbeaten through the entire Scottish domestic season.

6 – Aberdeen warmed up for the Scottish Cup final by thumping Partick Thistle 6-0 at Firhill in the Ladbrokes Premiership on Sunday. The Dons raced into a 4-0 lead within the first 26 minutes – only once in the Premiership era has a side scored four goals in a quicker time, when Celtic got four in 22 minutes against Hamilton Accies in January last year. It was the third time this year the Dons scored four goals in the first half of a Premiership match – they also did it against Motherwell in February and Dundee in March. Nineteen-year-old Scott Wright staked his claim for a cup final spot by netting a hat-trick in what was just his second career start. Wright is the first teenager to hit a top-flight hat-trick since Anthony Stokes scored a treble for Falkirk against Inverness in December 2006.

179 – Dundee United moved one step closer to an instant return to the Ladbrokes Premiership after beating Falkirk 2-1 in a dramatic play-off semi-final at the Falkirk Stadium. James Craigen put the Bairns ahead in the 11th minute and for over an hour it looked like Peter Houston’s side were heading for a second straight final before the Terrors netted twice in the final 15 minutes to set up a clash with Hamilton Accies. Simon Murray pulled Ray McKinnon’s side level with his 18th goal of the season – the former Arbroath striker has scored in all four play-off matches so far. United’s winner came from a far more unlikely source, with Paul Dixon claiming his first goal in over five years. Dixon’s last goal came in a 4-0 victory over Kilmarnock in February 2012 – between then and Friday’s dramatic winner he played 179 times for United and Huddersfield Town without finding the net.

12 – Brechin City secured promotion to the Ladbrokes Championship after a thrilling play-off victory over Alloa Athletic at the Indodrill Stadium. City led 1-0 from the first leg, and took an early lead on Saturday, but the Wasps scored twice in quick succession to level things up on aggregate. Brechin then took the lead on two further occasions, but were pegged back both times, sending the tie to penalties after a 4-4 draw on aggregate. James Dale scored the winning spot-kick to send Brechin back to the second tier for the first time in 12 years. They became the first side to win both the semi-final and final of the play-offs on penalties. The Glebe Park men have spent just four of the last 30 seasons in the second tier, and finished bottom on all four occasions, but Darren Dods and his side will have the chance to set that record straight next year.

5 – Forfar Athletic secured an immediate return to League 1 after thumping Peterhead 7-2 on aggregate in the play-off final. Gary Bollan’s men won 2-1 at home in midweek and followed that up with a stunning 5-1 success at Balmoor on Saturday. This was Forfar’s fifth participation in the play-offs, and their second success – they gained promotion to the third tier in 2009/10, but then missed out on promotion to the second tier in 2010/11, 2012/13 and 2014/15. Saturday’s thumping victory was the first time the Loons had scored five goals away from home since January 2014, when they beat Brechin City by the same scoreline.

112 – Cowdenbeath retained their place in the SPFL after a nail-biting League 2 play-off final victory over East Kilbride. Gary Locke’s side prevailed on penalties after a 1-1 aggregate draw, thus avoiding the ignominy of three consecutive relegations. The Blue Brazil first joined the Scottish League 112 years ago, in time for the start of the 1905/06 season, and have remained part of it ever since, with the exception of a short hiatus during World War I.  Montrose survived a similar struggle two seasons ago and bounced back to secure a spot in the promotion play-offs this season - Cowdenbeath will be hoping this narrow escape can galvanise them in the same way.