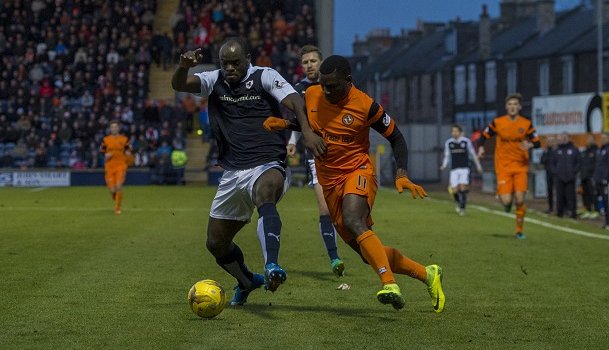 6 Ross County climbed into the Ladbrokes Premiership top six after beating Aberdeen 2-1 at the Global Energy Stadium. Jim McIntyre’s side have quietly strung together a six-match unbeaten run since the start of November, despite having faced four of the top five in the division. The Staggies have an impressive home record against Aberdeen since being promoted in 2012 – they have picked up four wins and a draw from seven matches, losing just twice. Liam Boyce opened the scoring for County, making him the Premiership’s outright top goalscorer with 10 goals. The Northern Irishman has reached double figures in each of his three seasons in Dingwall.

28 Celtic defeated Dundee 2-1 at Celtic Park to extend their unbeaten domestic run to 20 matches. Brendan Rodgers’ side have won 11 straight Ladbrokes Premiership matches and have an 11-point lead at the top of the table. Saturday’s victory extended their unbeaten streak against Dundee to 28 matches, a run which stretches back over 15 years. Dundee’s last win came in May 2001, when a double from Fabian Caballero handed them a 2-0 victory at Celtic Park.  Leigh Griffiths found the net for the third consecutive Premiership fixture, taking his tally to 90 goals in 148 top-flight appearances for Hibs and Celtic.

6 Dundee United remain level on points with Hibernian at the top of the Ladbrokes Championship after a 0-0 draw with Raith Rovers at Stark’s Park. The Terrors extended their unbeaten run to 13 matches in all competitions – their last defeat came against Morton in the Betfred Cup quarter-final in September. Ray McKinnon’s side equalled a club record by keeping a sixth consecutive clean sheet; the Tangerines also achieved this in 1977, 1985 and 1986, all under the management of Jim McLean. Cammy Bell has not conceded a goal in 585 minutes of football, and is now just 30 minutes short of beating Hamish McAlpine’s club record of 615 minutes, set back in 1977.

5 Livingston moved 10 points clear at the summit of Ladbrokes League 1 after a 2-0 win over Airdrieonians at the Tony Macaroni Arena. David Hopkin’s side were just a point clear of Airdrie at the start of December, albeit with a game in hand, but they have recorded four league wins this month to build up an imposing lead. When you include their Scottish Cup win over Airdrie, Livi have won five straight matches, which is their best run in over five years. The last time they won five or more matches in a row was February-March 2011, a season which finished with them winning the third tier title.

7 Forfar Athletic defeated Cowdenbeath 4-3 at Central Park to move seven points clear at the top of Ladbrokes League 2. Saturday’s victory took the Loons to 35 points for the season, surpassing their tally for the entire 2015/16 campaign in League 1. This is the second time Forfar have beaten Cowdenbeath 4-3 this season – the match at Station Park in August also finished with the same scoreline and Gavin Swankie scored a late winner in both matches.