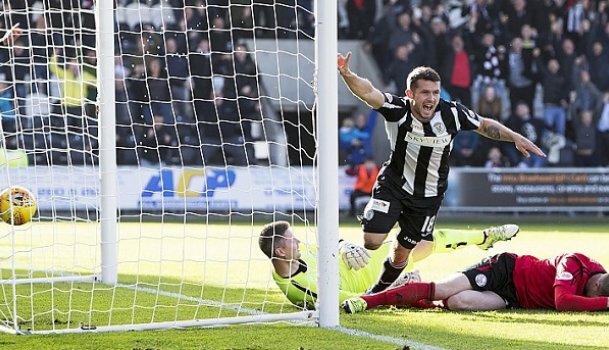 Resident statto @splstats looks at some of the numbers from the weekend, focusing on Aberdeen, Rangers, St Mirren, Albion Rovers &amp;&nbsp;Stenhousemuir.

Resident statto @splstats looks at some of the numbers from the weekend, focusing on Aberdeen, Rangers, St Mirren, Albion Rovers & Stenhousemuir.

3 – Aberdeen defeated St Johnstone 3-0 at Pittodrie to move level on points with Celtic at the top of the Ladbrokes Premiership table. Derek McInnes’ side ended a run of five home matches without a league win against Saints – their last Premiership victory over St Johnstone at Pittodrie was on New Year’s Day 2015, although they did beat the Perth side in last season’s Betfred Cup. Adam Rooney was the Dons’ hero, scoring the fourth hat-trick of his Aberdeen career; he also netted trebles against Daugava Riga and Livingston in 2014 and Motherwell earlier this year. This is just the second time a Dons player has bagged a hat-trick against St Johnstone – the only previous one was scored by John Hewitt in a 5-1 win at Muirton Park in November 1983.

28 – Rangers climbed back up to third place in the Ladbrokes Premiership after defeating Hamilton Accies 4-1 at The SuperSeal Stadium on Friday night. The Gers are now unbeaten in 28 matches against Accies in all competitions, a run which stretches back 30 years. The last Accies win over Rangers came in January 1987, when Adrian Sprott handed them a shock 1-0 win in the Scottish Cup at Ibrox. Since then, the Light Blues have won 26 and drawn two of their 28 meetings, racking up 77 goals in the process. Friday’s result continued Rangers’ unbeaten away league run under Pedro Caixinha – they have picked up six wins and two draws in eight matches since the Portuguese manager took over in March.

8 – St Mirren returned to the summit of the Ladbrokes Championship after a hard-fought 2-1 victory over Brechin City at the Paisley 2021 Stadium. Jack Ross’ side have now recorded eight consecutive home wins in all competition, which is Saints’ best run in over 40 years.  Alex Ferguson was in charge the last time St Mirren recorded eight or more home wins on the bounce – that was between October 1976 and March 1977, when they notched up nine in a row on their way to winning the First Division title.

32 – Albion Rovers moved up to third place in Ladbrokes League 1 after defeating leaders Raith Rovers 2-1 at Cliftonhill on Saturday. It was the Coatbridge Rovers’ first league triumph over their Kirkcaldy namesakes in almost exactly 32 years – their last win came on September 28, 1985, when goals from Brian McKay and Vic Kasule earned them a 2-0 victory. Raith had picked up seven wins and a draw in eight league meetings since then, prior to Saturday’s defeat.

7 – Stenhousemuir beat Edinburgh City 3-0 at Ochilview to climb up to second spot in Ladbrokes League 2. Brown Ferguson’s side are now unbeaten in seven league matches, having picked up four wins and three draws since losing to Stirling Albion on the opening day. That represents the Warriors’ best run since they went 12 undefeated between January and April 2014. Mark McGuigan has been at the heart of Stenny’s great start – the forward scored twice on Saturday to take his tally to nine league goals in eight matches this season.