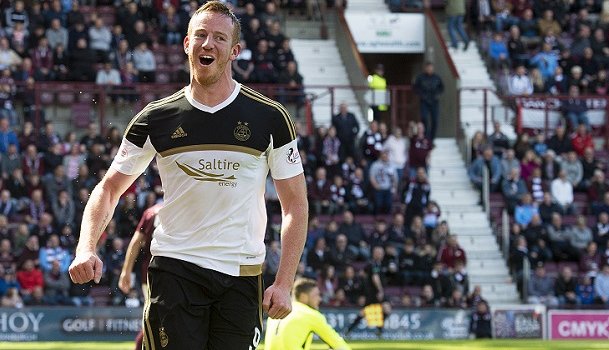 We look at some of the numbers behind the weekend games, with the focus on Aberdeen, Celtic, St Mirren, Airdrieonians and Arbroath.

We look at some of the numbers behind the weekend games, with the focus on Aberdeen, Celtic, St Mirren, Airdrieonians and Arbroath.

20 Adam Rooney has become the first Aberdeen player since Joe Harper in the late 1970s to score 20 or more goals in three consecutive seasons. Rooney reached the landmark on Sunday when he netted his 12th Premiership goal of 2016/17 in the 2-1 win over Hearts at Tynecastle. He has also scored twice in the Betfred Cup and three times in the Scottish Cup, on top of three goals in the Europa League qualifiers.

96 Celtic are just four goals short of 100 Ladbrokes Premiership goals this season after beating St Johnstone 4-1 at Celtic Park on Saturday. The Hoops last hit a century in 2013/14 when Neil Lennon’s men racked up 102 goals en route to the title. Brendan Rodgers’ side remain unbeaten in domestic football in 2016/17 and need just one more victory to reach the 100-point mark, with 31 wins and four draws so far. Celtic last reached that milestone in 2001/02 when Martin O’Neill’s team amassed 103 points in the SPL.

2 St Mirren ensured their Ladbrokes Championship survival with a 1-1 draw against champions Hibernian at a sold-out Easter Road. The Buddies looked down and out in December but finished in seventh place, above both Dumbarton and Raith Rovers on goal difference. Manager Jack Ross made a number of changes to his squad during the transfer window and it certainly paid off. St Mirren lost only two out of 14 league games from February onwards - at Raith Rovers and Dundee United.

23 Airdrieonians striker Andy Ryan scored a last-day double in the 3-2 defeat of Queen's Park to finish top of the Ladbrokes League 1 charts on 23 league goals. Livingston forward Liam Buchanan netted 22 goals and was top scorer for much of the campaign but Ryan grabbed a hat-trick at East Fife on April 29 and weighed in with two more at the weekend as the Diamonds sealed a play-off place.

2 Arbroath claimed just the second trophy in their history when they pipped local rivals Forfar Athletic to the Ladbrokes League 2 title on Helicopter Saturday. Arbroath won their first silverware in 2010/11, when Paul Sheerin guided them to the Third Division title. Dick Campbell's side finished two points clear at the top after drawing 1-1 at Stirling Albion while Annan won 4-2 at Station Park. Forfar had led from August 20 until the second last weekend of the season but it was the Red Lichties who came out on top. They were backed by a 1,175-travelling support at Forthbank and lost just one away league game all season - at Clyde in September.