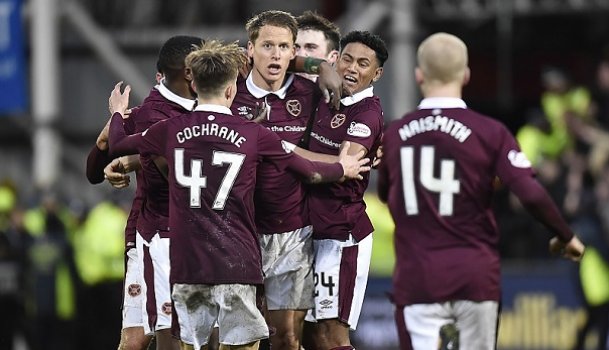 Resident statto @splstats looks at some of the numbers from the weekend in the Scottish Cup and Ladbrokes League 1 and League 2.

Resident statto @splstats looks at some of the numbers from the weekend in the Scottish Cup and Ladbrokes League 1 and League 2.

7 - Heart of Midlothian moved into the fifth round of the Scottish Cup thanks to a 1-0 victory over Hibernian at Tynecastle. It was the Jam Tarts' first Edinburgh derby victory since August 2014, ending a nine-match winless streak against their rivals. Craig Levein's side extended their club record run of consecutive clean sheets to seven matches - the last player to score against them was Hamilton Accies' Xavier Tomas on December  2. Since then, goalkeeper Jon McLaughlin has played 651 minutes without conceding a goal.

10 - Aberdeen defeated Ladbrokes Championship leaders St Mirren 4-1 at Pittodrie to book their place in the last 16 of the Scottish Cup. The Dons are now unbeaten in their last 10 matches against Saints in all competitions, a run which stretches back over six years. Saints’ last win against Aberdeen came in October 2012, when St Mirren triumphed on penalties at Pittodrie. Aberdeen are unbeaten in their last nine Scottish Cup ties at Pittodrie - their last defeat came against Raith Rovers in February 2010.

11 - Dundee United moved into the fifth round of the Scottish Cup courtesy of a 2-0 victory over Alloa Athletic at the Indodrill Stadium. The Tangerines are now unbeaten in their last 11 matches against the Wasps in all competitions, a run which includes nine wins and a draw, with an aggregate score of 32-6. Alloa’s last win over United was way back in March 1960, when a Willie Syme hat-trick handed them a 3-2 victory.

10 - Stranraer climbed into the final Ladbrokes League 1 promotion play-off spot after beating Raith Rovers 1-0 at Stair Park. Saturday's result ended The Blues' run of 10 matches in all competitions without a win against Rovers. Their last victory was 2-1 in a League Cup tie at Stair Park in August 2004 when Lee Sharp and David Turnbull got the goals.

11 - Clyde defeated Montrose 3-1 at Links Park on Saturday to climb to eighth place in Ladbrokes League 2. It ended a run of 11 matches without a victory for The Bully Wee - their last win came against Keith in the Scottish Cup back in October. The victory saw Clyde leapfrog Edinburgh City and, perhaps more importantly, move eight points clear of Cowdenbeath at the foot of the division.