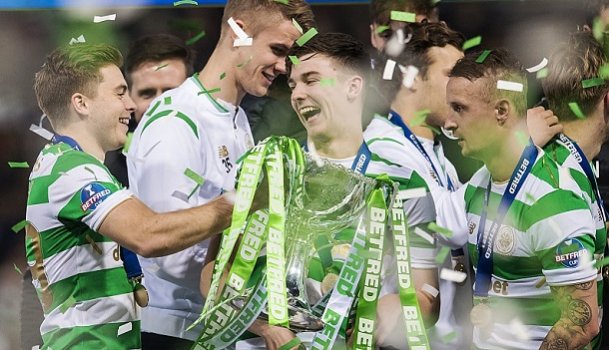 Resident statto @splstats looks at some of the numbers behind the weekend games across the SPFL and Betfred Cup final.

Resident statto @splstats looks at some of the numbers behind the weekend games across the SPFL and Betfred Cup final.

17 – Celtic defeated Motherwell 2-0 at Hampden on Sunday to win the Betfred Cup for the second consecutive season. The Hoops have now won the trophy 17 times, taking their overall domestic trophy tally to 102. James Forrest scored the opening goal for Celtic - the Scotland winger also netted in their previous two League Cup final victories in 2014/15 and 2016/17. Forrest is just the sixth player in the last 50 years to score in three League Cup finals - the others being Henrik Larsson, Ally McCoist, Ian Durrant, Davie Cooper and Kenny Dalglish.

12 – Aberdeen moved to within three points of Celtic at the top of the Ladbrokes Premiership table after beating Kilmarnock 3-1 at Rugby Park on Sunday. The Dons are now unbeaten in their last 12 away Premiership fixtures, picking up 10 wins and two draws since losing to Hamilton Academical at the end of February. This represents their best run of form away from home in nearly 25 years – the last time the Dons went 12 away league matches without defeat was between September 1992 and March 1993. The Dons have an astonishing recent record against Kilmarnock – they are now unbeaten in 16 matches and Sunday’s victory was their seventh straight win at Rugby Park.

3 – Livingston moved up to third in the Ladbrokes Championship after beating Queen of the South 3-0 at Palmerston on Saturday. David Hopkin’s side have lost just one of their last 10 league fixtures and have moved to within two points of leaders Dundee United with a game in hand.  Livi’s success this season has been built on a strong defensive record – they picked up their third consecutive clean sheet on Saturday, taking their total to nine in all competitions.

6 – East Fife continued their impressive Ladbrokes League 1 home form by thumping Airdrieonians 6-1 at Bayview. Darren Young’s side have won four consecutive league matches in Methil and scored 17 goals in the process. The last time they scored six goals in a league game was a 6-0 win away to Stirling Albion in March 2016, helped by a double from substitute Nathan Austin.  East Fife are the only side in the SPFL yet to draw a league match this season – they have won seven and lost seven of their 14 fixtures.

1 – Montrose climbed to the summit of Ladbrokes League 2 after beating Stenhousemuir 1-0 at Ochilview on Saturday. Stewart Petrie’s side have picked up five wins and a draw in their last six matches to leapfrog Stirling Albion at the top of the table. The Spice Girls, Ant & Dec and Babybird and were all in the top 20 of the UK charts the last time The Gable Endies were top of the league this far into the season – that came back in December 1996 when they topped the Division 3 table after 17 matches. They will be hoping to avoid a repeat of their finish to that campaign – they only won three of their last 19 matches and eventually finished sixth in the table.