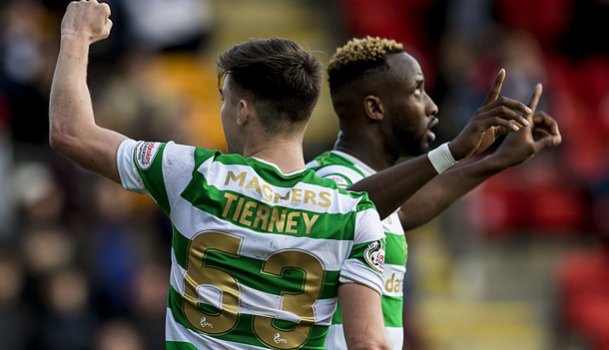 Resident statto @splstats looks at some of the numbers from the weekend, focusing on Celtic, Hibs, Dundee United, Ayr United and Stirling Albion.

Resident statto @splstats looks at some of the numbers from the weekend, focusing on Celtic, Hibs, Dundee United, Ayr United and Stirling Albion.

63 – Celtic broke their own Scottish record for unbeaten domestic matches after thumping St Johnstone 4-0 at McDiarmid Park on Saturday. The Hoops have now gone 63 matches without defeat in the Ladbrokes Premiership, Scottish Cup and Betfred Cup since losing to Saints back in May 2016. The run kicked off with a 7-0 victory over Motherwell in Ronny Deila’s final match in charge - that was the first of 25 occasions where they have scored four or more goals during this run. Overall, Celtic have recorded 56 wins and seven draws, scoring 183 goals and conceding just 35.

4 – Hibernian moved to within two points of second-placed Aberdeen following their 2-1 Ladbrokes Premiership victory over Dundee on Saturday. Neil Lennon’s side have recorded four consecutive Premiership victories, climbing from seventh to third in the process. This is the first time in six-and-a-half years that the Hibees have notched up four straight top-flight wins – Colin Calderwood was in charge when they last achieved it back in February and March 2011. Simon Murray netted the winner on Saturday to take his tally to 13 goals in 18 matches in all competitions since making the move from Dundee United in the summer.

7 – Dundee United moved level on points with St Mirren at the top of the Ladbrokes Championship after beating the Paisley side 2-1 at Tannadice. Saturday’s victory was the Terrors’ seventh straight home win over Saints in all competitions, a run which stretches back five years. St Mirren’s last victory at Tannadice was a thrilling 4-3 success in the SPL in December 2012. United have lost just two matches at Tannadice in all competitions since the start of last season – a 1-0 loss to Hibernian back in March and a 2-0 reverse against Inverness last month. The Ladbrokes Championship title race is shaping up to be an exciting one – just two points separate the top five.

4 – Ayr United beat Arbroath 4-1 at Gayfield to climb to the top of the Ladbrokes League 1 table on goal difference. Since losing to Raith Rovers in early September, The Honest Men have gone seven matches without defeat and have overhauled a four-point deficit at the top of the table. Ian McCall’s side have given their travelling supporters plenty to cheer this season – they have scored 35 goals in 10 away fixtures in all competitions, which is more than their entire away goal tally in each of the last six seasons. Amazingly, Saturday’s four-goal haul was the sixth time in 2017/18 Ayr have scored four or more goals on their travels.

6 – Stirling Albion maintained their place at the top of Ladbrokes League 2 after a hard-fought 2-1 victory over Edinburgh City at Ainslie Park. Dave Mackay’s side have now recorded six consecutive away wins and are just one short of equalling the club record of seven, which was most recently set in 1968/69.  Hearts loanee Callumn Morrison scored the winning goal to take his tally for the season to 10, eight of which have come in the league.  He is the second Binos player to reach double figures this season – Darren Smith has found the net 14 times.