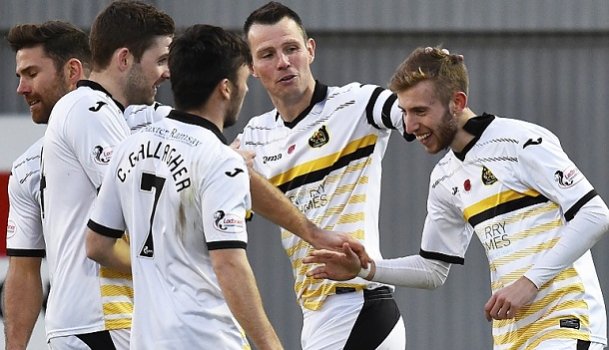 Resident statto @splstats looks at some of the numbers behind the weekend games in the IRN-BRU Cup and Ladbrokes Leagues 1 &amp; 2.

Resident statto @splstats looks at some of the numbers behind the weekend games in the IRN-BRU Cup and Ladbrokes Leagues 1 & 2.

7 – Inverness Caledonian Thistle defeated Falkirk 1-0 at The Tulloch Caledonian Stadium to move into the IRN-BRU Cup semi-finals. The Caley Jags have played 657 minutes in all competitions without conceding a goal – the last player to score against them was Dumbarton’s Sam Wardrop on September 23. Since then, Inverness have kept seven consecutive clean sheets, setting a new club record in the process. This is the fourth time Inverness have reached the semi-final of the Challenge Cup and they have gone on to reach the final on all three previous occasions.

1 – Dumbarton reached their first ever IRN-BRU Cup semi-final after defeating Raith Rovers 2-0 at the YOUR Radio 103FM Stadium. The Sons have won four matches to make it to this season’s semi-final – in the 22 previous campaigns in the Challenge Cup they had only won a total of five games. This will be Dumbarton’s first semi-final in a national cup competition since they reached they were beaten by Hearts in the Scottish Cup semi-final in 1975/76. Stevie Aitken’s side are now just one game away from reaching their first cup final since the 19th century.

45 – Arbroath climbed into the promotion play-off places in Ladbrokes League 1 after beating Queen’s Park 2-0 at Hampden on Saturday. The defeat ended the Red Lichties’ run of four straight away defeats against the Spiders – their last away win against Queen’s Park came at the Excelsior Stadium in Airdrie back in August 2014. On Saturday, former Scotland goalkeeper Rab Douglas made his debut for Arbroath at the age of 45. The ex-Celtic No 1 made his Scottish league debut for Meadowbank Thistle back in the 1993/94 season, which was three years before team-mate Scott Martin was born. Douglas is the oldest player to appear in the Scottish leagues since Andy Millen turned out for Queen’s Park in May 2011, just a month or so short of his 46th birthday.

4 – Alloa Athletic stay third place in Ladbrokes League 1 following a 2-0 victory over Albion Rovers at Cliftonhill. Jim Goodwin’s side made a slow start to the season but have recorded four consecutive wins to move into promotion contention. The Wasps extended their unbeaten away run against Albion Rovers to six matches – their last defeat in Coatbridge came 20 years ago, when goals from Dougie Bruce and Lee Gardner handed The Wee Rovers a 2-1 victory.

5 – Stenhousemuir defeated Peterhead 3-2 at Balmoor to continue their impressive run of form in Ladbrokes League 2. The Warriors have lost just one of their last 11 matches in all competitions, and now find themselves just four points behind Stirling Albion at the top of the table. Saturday’s success was Stenhousemuir’s fifth consecutive victory over Peterhead – prior to this run they had never won more than two in a row against the Blue Toon.