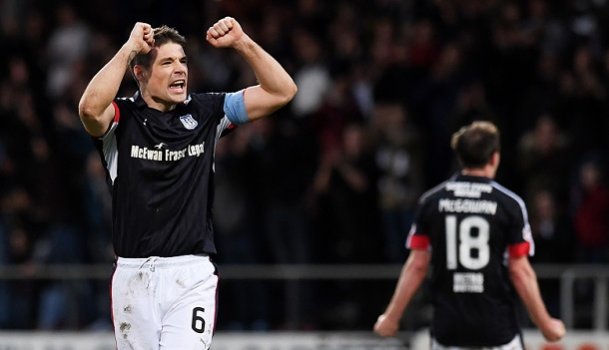 Resident statto @splstats looks at some of the numbers from the&nbsp;weekend, focusing on Dundee, Aberdeen, Dundee United, St Mirren, Alloa and Elgin.

Resident statto @splstats looks at some of the numbers from the weekend<, focusing on Dundee, Aberdeen, Dundee United, St Mirren, Alloa and Elgin.

19 Dundee climbed into the top six of the Ladbrokes Premiership after beating Rangers 2-1 at Dens Park on Sunday. The Dee had lost their last 11 matches against the Gers and hadn’t beaten them in their last 19 meetings. ‘It Wasn’t Me’ by Shaggy was UK No 1 the last time Dundee defeated Rangers – that was back in March 2001 when goals from Claudio Caniggia and Steven Milne handed them a 2-0 victory at Ibrox. Dundee ended an even longer wait for a home win over Rangers – their last success at Dens Park was almost 25 years ago in August 1992, when goals from Ivo Den Bieman, Ian Gilzean and Billy Dodds (2) handed them a 4-3 victory.

13 Aberdeen moved six points clear of Rangers in second place in the Ladbrokes Premiership after coming from behind to defeat Kilmarnock 2-1 at Rugby Park. Derek McInnes’ side have won nine of their last 10 matches in all competitions, with their only defeat coming at Celtic Park earlier this month. The Dons have now recorded 13 consecutive wins over Killie, running up an aggregate scoreline of 30-6 in the process. The last time Kilmarnock managed even a point against Aberdeen was a 1-1 draw back in February 2013 and their last win against the Dons came at Pittodrie in December 2012.

18 Dundee United defeated Queen of the South 3-2 to move into the final of the IRN-BRU Cup. The Terrors are participating in the tournament for just the second time and have reached the final on both occasions. Back in 1995/96, they lost to Stenhousemuir on penalties and will be hoping to go one better this time around. The win extended United’s unbeaten run against the Doonhamers to 18 matches in all competitions. Harold MacMillan was still Prime Minister the last time Queen of the South defeated Dundee United – that was back in September 1962.

30 St Mirren will be Dundee United’s opponents in the IRN-BRU Cup final after the Scottish Saints defeated the Welsh champions The New Saints 4-1 at the Paisley 2021 Stadium. The cup competitions have provided a welcome distraction for Saints this season – they have won just twice in 23 Championship outings but have picked up 10 victories in 11 cup matches this campaign. The final will be a rematch of the 1987 Scottish Cup final, 30 years on from Saints’ famous 1-0 victory at Hampden.

8,000 Alloa Athletic climbed back up to second in Ladbrokes League 1 after defeating Queen’s Park 2-0 at Hampden. Jim Goodwin’s side are unbeaten in their last six away matches in all competitions, with their last defeat on the road coming back in mid-November against Airdrie. Saturday’s success was the Wasps’ fifth consecutive win over the Spiders at Hampden, a run which stretches back to February 2009. Alloa striker Greig Spence made a bit of personal history on Saturday, netting the 8,000th goal in the SPFL since the leagues merged back in 2013.

6 Elgin City thrashed Clyde 4-1 at Borough Briggs to close the gap on Forfar and Arbroath at the top of Ladbrokes League 2. The Black and Whites are now 12 points behind Forfar and four behind Arbroath but have two games in hand over both clubs. Jim Weir’s side are unbeaten in their last six League 2 matches; they drew twice with leaders Forfar, and won each of their other four fixtures. They have picked up five wins and a draw from their last six league matches at Borough Briggs and have rattled in 22 goals in the process.