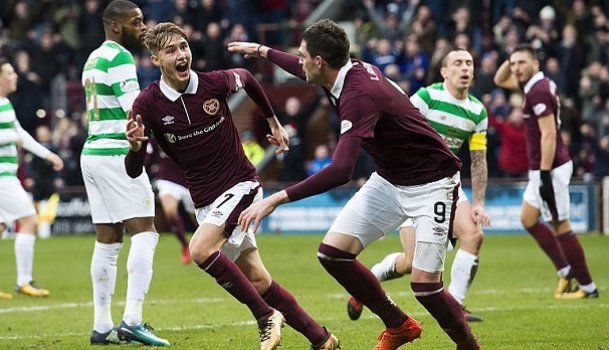 Resident statto @splstats looks at some of the numbers behind a dramatic weekend of football across all four divisions of the SPFL.

Resident statto @splstats looks at some of the numbers behind a dramatic weekend of football across all four divisions of the SPFL.

1895 – Heart of Midlothian ended Celtic’s 69-match domestic unbeaten run, beating the Ladbrokes Premiership leaders 4-0 at Tynecastle on Sunday. Craig Levein’s side ended a run of 20 matches without a win over Celtic – their previous success was the Scottish Cup semi-final in April 2012. The four-goal winning margin marked Hearts’ biggest victory over Celtic since Queen Victoria was on the throne – that was a 5-0 win at Celtic Park back in September 1895. Sunday was just the sixth time in the last 50 years that Celtic have lost a league match by four or more goals, the most recent being 4-0 to St Mirren in March 2010. Hearts are now unbeaten in six Premiership matches and have recorded three consecutive wins for the first time since August-September 2016.

3 – Aberdeen closed the gap on Celtic at the top of the Ladbrokes Premiership to two points thanks to an emphatic 4-1 victory over Hibernian at Pittodrie. Gary Mackay-Steven was the home hero, scoring the first hat-trick of his professional career, quadrupling his goal tally for the season in the process. It was the fifth Premiership hat-trick scored by a Dons player in 2017 – Adam Rooney netted trebles against Motherwell in February and St Johnstone in September, Andrew Considine got his unlikely hat-trick against Dundee in March and Scott Wright scored three against Partick Thistle in May. Mackay-Steven was the first Dons player to score a hat-trick against Hibs since Hans Gillhaus in a 4-2 win at Easter Road in March 1991 and the first at Pittodrie since Billy Little netted three in a 4-0 victory in October 1958.

46 – St Johnstone climbed back into the top six of the Ladbrokes Premiership following a 3-1 victory over Rangers at Ibrox on Saturday. It was Saints’ first league win at Ibrox in over 46 years – their last success was back in April 1971 when goals from Henry Hall and John Connolly handed them a 2-0 victory. Between then and Saturday, Saints had visited 31 times in the league, picking up just three draws and losing the other 28. Tommy Wright’s side have recorded three consecutive away wins for the first time since the end of 2015.

0 – Inverness Caledonian Thistle beat Dumbarton 1-0 to leapfrog their opponents into seventh place in the Ladbrokes Championship.  John Robertson’s side continued their astonishing defensive form; they have now kept 10 clean sheets in their last 11 matches in all competitions.  Leaders St Mirren are the only side who have scored against Inverness since Dumbarton on September 23. The Caley Jags maintained their 100% record against the Sons at the Tulloch Caledonian Stadium – this was Dumbarton’s third visit and they have travelled back down the road empty handed on all three occasions.

50 – Ayr United extended their lead at the top of the Ladbrokes League 1 table to eight points after coming from behind to beat East Fife 4-1 at Bayview. Ian McCall’s side are the top scorers in the SPFL by a considerable margin – they have scored 50 times in 17 league matches, which is nine more than the next highest scorers Celtic. Saturday’s win was the Honest Men’s ninth consecutive victory in all competitions, which is their best run in almost 50 years. The last time Ayr managed nine or more wins in a row was in the 1968/69 season, when they won 10 straight matches on their way to gaining promotion to the top flight.

9 – Montrose defeated Elgin City 3-0 at Links Park to move six points clear at the top of Ladbrokes League 2. The Gable Endies are unbeaten in nine league matches for the first time in over two decades. The albums ‘Definitely Maybe’ by Oasis and ‘Parklife’ by Blur were riding high in the charts the last time Montrose went this many league matches without defeat – that was in September-December 1994 under the management of John Holt. Montrose finished that season by gaining promotion to the third tier and Stewart Petrie and his side will be hoping to repeat the feat this time around.