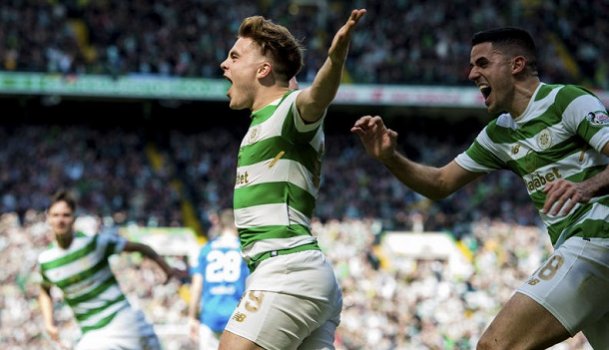 Resident statto @splstats looks at some of the numbers after a dramatic weekend of action across all four divisions of the SPFL.

Resident statto @splstats looks at some of the numbers after a dramatic weekend of action across all four divisions of the SPFL.

7 – Celtic thumped Rangers 5-0 at Celtic Park to secure the Ladbrokes Premiership title. The Hoops’ seven consecutive league titles is the third-best run of all time – only bettered by the nine-in-a-row successes achieved by Celtic from 1965/66-1973/74 and Rangers between 1988/89 and 1996/97. The Bhoys have now won the title on 49 occasions and are closing in on Rangers’ record of 54 league titles. Celtic’s five-goal winning margin was their biggest ever league win over Rangers and their biggest in any competition since their famous 7-1 victory in the 1957/58 League Cup final.

7 – Hibernian kept themselves in the hunt for second place in the Ladbrokes Premiership courtesy of a thrilling 5-3 victory over Kilmarnock at Easter Road. Hibs have now recorded seven consecutive home wins – ‘Beautiful Day’ by U2 was at UK No 1 the last time they achieved this, back in April-October 2000. Neil Lennon’s side are unbeaten in 11 Premiership matches, with their last defeat coming against Celtic in January. The Hibees have only lost one of their last 13 matches against Kilmarnock in all competitions; that was 1-0 at Easter Road on the final day of the 2013/14 season which sent Hibs into the relegation play-offs.

4 – Dunfermline Athletic secured fourth spot in the Ladbrokes Championship and a place in the Premiership play-offs courtesy of a 4-0 victory over Dumbarton at East End Park. The Pars will go into the play-offs in excellent form – they are unbeaten in 10 league matches, with their last loss coming against champions St Mirren back in early March. Allan Johnston’s side have kept five clean sheets in their last six matches at East End Park; the only player to breach their defence in that period was Queen of the South’s Jordan Marshall in Dunfermline’s 3-1 win back in March. The Pars now face Dundee United in the play-off quarter-final as they aim to return to the top flight for the first time since 2011/12.

21 – Ayr United defeated Albion Rovers 2-0 to secure the Ladbrokes League 1 title on a dramatic Helicopter Saturday. Ayr’s win, coupled with Raith Rovers’ failure to beat Alloa at Stark’s Park, means the Honest Men secured their first league title in 21 years and an immediate return to the Ladbrokes Championship. Ian McCall’s side banged in 92 league goals on their way to the title, which will be the highest tally in the SPFL this season unless Celtic or Rangers score at the rate of eight per game in their remaining Premiership fixtures. Each of Ayr’s last four forays into the second tier have ended in immediate relegation but, with the club now full-time, they will be hoping to establish themselves in that division in the coming years.

22 – Montrose clinched the League 2 title on Helicopter Saturday thanks to a nervy 1-1 draw with Elgin City at Links Park. At half-time, with the Gable Endies trailing and Peterhead leading Edinburgh City, the helicopter had its course set for Balmoor but Jamie Redman’s goal early in the second half ensured that Stewart Petrie’s side got the point they needed. It was just the second league title in Montrose’s history; their only previous triumph was the 1984/85 Second Division. The Gable Endies have spent 22 consecutive seasons in the bottom tier of Scottish football but can finally look forward to a change of scenery in League 1.