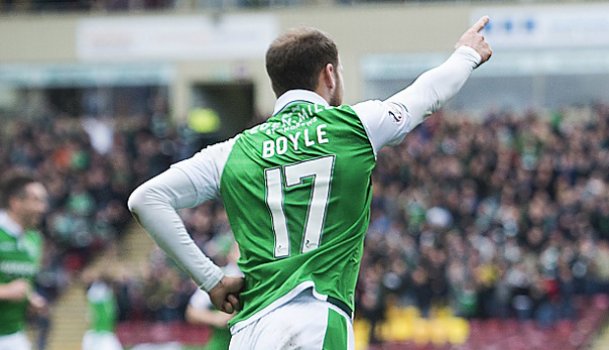 We look at some of the numbers from the weekend, focusing on Celtic, Rangers, Hibernian, Inverness CT, Ayr United and Stirling Albion.

We look at some of the numbers from the weekend, focusing on Celtic, Rangers, Hibernian, Inverness CT, Ayr United and Stirling Albion.

62 Celtic equalled their own British record of 62 domestic games without defeat thanks to a 1-1 draw against Kilmarnock at Parkhead. Willie Maley's team set that landmark 100 years ago but Brendan Rodgers' side will eclipse it if they avoid defeat to St Johnstone at McDiarmid Park on Saturday lunchtime. Saints were the last team to beat Celtic in Scottish football, winning 2-1 in Perth in May 2016 when Ronny Deila was still in charge of the Hoops.

2 Kenny Miller marked his return to the Rangers side by scoring his first Premiership goals of the season in the 3-1 win against Hearts at Murrayfield, which means the Ibrox men remain undefeated away from home in the league since losing at Inverness in February. Miller, who turns 38 in December, scored his first Rangers goal in a 4-2 victory at Kilmarnock in August 2000 and this Saturday is 17 years to the day since he bagged five in a 7-1 thrashing of St Mirren.

6 Hibernian ended Motherwell's good run with a 1-0 win at Fir Park on Saturday to make it six away games without defeat since returning to the top flight. Hibs fans have enjoyed their away days in recent times - since the start of 2016/17 Neil Lennon's men have lost only two away league matches, against Dundee United in December and St Mirren in March. They will be hoping to maintain that impressive sequence when they travel to Kilmarnock on Tuesday night.

5 Inverness Caley Thistle continued their recent revival with a 1-0 home win over title-chasing Dunfermline Athletic in the Ladbrokes Championship. It was a fifth successive clean sheet for John Robertson's men, who have also shut out Queen of the South, Falkirk and Dundee United in the Championship and Peterhead in the IRN-BRU Cup since losing 2-1 at Dumbarton on September 23.

7 Lawrence Shankland scored the clincher in Saturday's 2-0 win over Stranraer at Somerset Park to take his tally to seven goals in seven games since joining Ayr United in early September. Only Airdrieonians have been able to stop the former Aberdeen forward from finding the net during that time and his weekend goal helped Ian McCall's side move men level on points with Ladbrokes League 1 leaders Raith Rovers, who were held by bottom club Forfar Athletic.

11 Stirling Albion forward Darren Smith remains the top scorer across the SPFL after taking his tally to 11 goals in Ladbrokes League 2. It was the fifth game in a row in which Smith had found the net (four matches in League 2 plus one in the Scottish Cup) but it wasn't enough to prevent Stenhousemuir from winning 2-1 at Forthbank. The Warriors' first goal came via the penalty spot from Mark McGuigan, taking him to 10 league goals and second in the SPFL scoring charts.