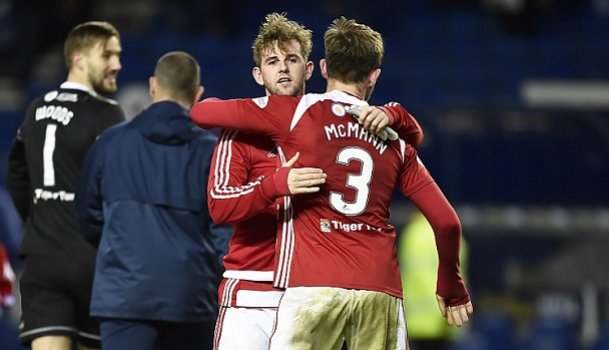 Resident statto @splstats looks at some of the numbers from the weekend, focusing on Hamilton Accies, Celtic, Dundee United, St Mirren and Ayr.

Resident statto @splstats looks at some of the numbers from the weekend, focusing on Hamilton Accies, Celtic, Dundee United, St Mirren and Ayr.

91 – Hamilton Academical recorded their first league win at Ibrox in 91 years, as goals from David Templeton and Darren Lyon earned them a 2-0 Ladbrokes Premiership win over Rangers. Accies’ last league success in Govan came in December 1926, when a double from Alex Dick plus goals from John Borland and Willie Moffat handed them a 4-1 victory. This was the same year that red telephone boxes appeared on the streets of the UK and John Logie Baird demonstrated his working television. It had been 30 years since Accies beat Rangers home or away in any competition – their last victory came in a Scottish Cup tie at Ibrox in January 1987, when Adrian Sprott scored the only goal in a 1-0 victory.

100 – Celtic extended their lead at the top of the Ladbrokes Premiership table following a 1-0 victory over Ross County at the Global Energy Stadium. Leigh Griffiths scored the only goal to take his tally to 100 in the Scottish top flight. Saturday’s free-kick was his 69th league goal for Celtic and he also scored 31 for Hibernian. The Staggies’ Highland rivals Inverness Caledonian Thistle have been Griffiths’ biggest victims – 13 of his century came against the Caley Jags. Dundee United (11), St Mirren (10) and Kilmarnock (10) have also been regularly on the end of a Griffiths goal. His former club Hibernian are the only side Griffiths has faced in the top flight without scoring but he has only made a single substitute appearance against them. The Scotland striker’s next target is 100 goals for Celtic in all competitions – Saturday’s strike took his tally to 94 in 165 appearances.

10 – Dundee United moved to the top of the Ladbrokes Championship after beating Falkirk 3-0 at Tannadice on Sunday. It was United’s biggest league win since they defeated Raith Rovers by the same scoreline back in February and was just the second time this season they have scored three goals in a league game. The Terrors are now unbeaten in their last 10 home matches against the Bairns, with Falkirk’s last win at Tannadice coming on New Year’s Day 2007 when Alan Gow netted a hat-trick in a 5-1 SPL win.

7 – St Mirren powered into the fourth round of the Scottish Cup after thumping East of Scotland League side Lothian Thistle Hutchison Vale 7-1 at Saughton Enclosure.  The last time Saints scored seven goals away from home was almost 55 years ago, when they hammered Third Lanark 8-0 in the Scottish Cup in January 1963. Gavin Reilly scored four on Saturday – he was the first player to do so for the Paisley club since Billy Mehmet netted five times in a 6-3 League Cup win over East Stirlingshire at Ochilview in 2009.

6 – Ayr United were also big winners in the Scottish Cup – the Ladbrokes League 1 leaders beat SJFA North Superleague side Banks O’Dee 6-2 at Spain Park. It was the first time The Honest Men had scored six times in a Scottish Cup tie since January 2002, when they recorded a 6-0 victory over Deveronvale. Ian McCall’s side have been in devastating form away from home this season, scoring 41 goals in 11 matches. This was the second time they have scored six goals on the road this season, while they have also netted five on three separate occasions and four goals twice.