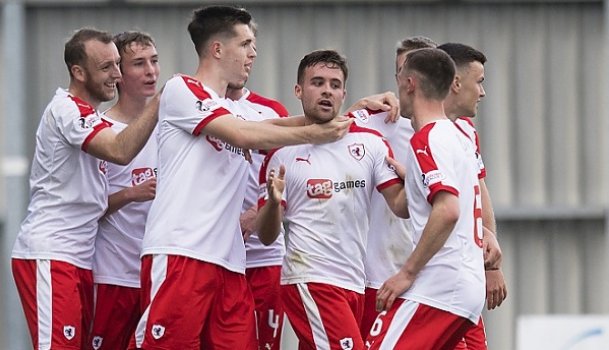 Resident statto @splstats looks at some of the numbers from the third round of the IRN-BRU Cup at the weekend.

Resident statto @splstats looks at some of the numbers from the third round of the IRN-BRU Cup at the weekend.

2 – Dumbarton defeated Stranraer 2-1 at the YOUR Radio 103FM Stadium on Friday night to book their place in the IRN-BRU Cup quarter-finals. It is just the second time the Sons have reached the last eight – their only previous progression to this stage came in 2002/03, when they beat East Fife and Ayr United before losing to Queen of the South. Prior to the start of this season, Dumbarton had only ever won five ties in the competition, which began in 1990/91, but Friday’s win was their third success this season.

3 – Inverness Caledonian Thistle progressed to the quarter-finals of the IRN-BRU Cup after beating Peterhead 3-0 at the Tulloch Caledonian Stadium on Saturday. It was the fourth meeting of the Caley Jags and the Blue Toon and Inverness have won all four, scoring 11 goals in the process. This is the fourth time they have reached the quarter-finals and on all three previous occasions they went on to reach the final.

12 – Queen of the South made it to the quarter-finals of the IRN-BRU Cup thanks to a 3-1 extra-time victory over Montrose at Links Park. This was the first meeting of the sides in over 12 years – the last time they faced each other was a Scottish Cup tie back in January 2005, when goals from Derek Lyle and Willie Gibson QOS a 2-1 victory. The Doonhamers are unbeaten in their last eight matches against the Gable Endies – Montrose’s last victory was way back in December 1993 when the sides were both in the bottom tier.

3 – Raith Rovers defeated St Mirren 3-1 at the Paisley 2021 Stadium to reach the quarter-finals of the IRN-BRU Cup. Rovers have been in tremendous goalscoring form all season – Saturday’s victory was the eighth time in 15 matches they have scored three or more goals.  They have already netted 41 times, which is just eight short of their total for the whole of last season. Lewis Vaughan was again on the scoresheet – he has found the net 16 times already, which is Raith’s best total for a season since Brian Graham netted 27 in 2012/13.

5 – Falkirk are through to the IRN-BRU Cup quarter-finals after a 2-0 victory over Dunfermline Athletic at The Falkirk Stadium. The Bairns have now recorded five straight home victories over the Pars, a run which stretches back to February 2013. Falkirk are the most successful club in Challenge Cup history – this is their eighth quarter-final appearance and they have won the trophy on four occasions