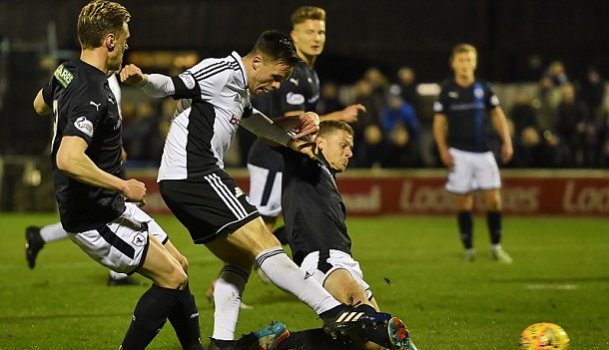 The Ladbrokes Premiership might be on a winter break but there&#39;s a big weekend of football in the Championship, League 1 and League 2.

The Ladbrokes Premiership might be on a winter break but there's a big weekend of football in the Championship, League 1 and League 2.

The landmark 10,000th SPFL goal is likely to be scored on Saturday, with the current tally standing at 9,965 league goals (excluding play-offs) since the SPL and SFL merged in summer 2013. We look at some of the numbers ahead of the weekend’s fixtures…

6 St Mirren have opened up a six-point lead at the top of the Ladbrokes Championship although closest challengers Dundee United have a game in hand. Jack Ross's team make the short journey to play Dumbarton, who beat them 1-0 in Paisley at the beginning of December. Meanwhile United, thumped 6-1 at Falkirk last week, travel to East End Park to face a Dunfermline Athletic side on a run of three straight wins.

5 It looks like St Mirren and Dundee United will battle it out for the Ladbrokes Championship title and there is also fascinating race for the play-offs, with only five points separating five clubs from Dunfermline in third down to Inverness CT in seventh. Two of them are in direct opposition on Saturday, with Inverness Caley Thistle aiming to follow up their 4-1 midweek win over Falkirk against Queen of the South in the Highland capital.

3.44 Ladbrokes League 1 is definitely the place to see goals this season, with an average of 3.44 per game. That compares to 2.61 in the Premiership, 2.71 in the Championship and 2.77 in League 2. Albion Rovers top the entertainment charts, with their 19 matches producing a weighty 86 goals, which equates to 4.53 per game. Brian Kerr's side are away to bottom club Forfar Athletic on Saturday.

10 There's a massive game at Stark's Park as Ladbrokes League 1 leaders Raith Rovers look to maintain their 100% home record against title rivals Ayr United. It's 10 wins out of 10 so far for Barry Smith's side, who have a one-point lead at the summit with two games in hand. Ayr have stuttered of late but have netted 32 goals in 10 away games, winning eight of them. It should be a cracker!

9 Peterhead have won nine of their last 10 matches in Ladbrokes League 2 - the exception being a 3-2 home defeat to Stenhousemuir - to move to within a point of leaders Montrose with two games in hand. The Blue Toon have been unstoppable recently, thrashing Montrose (6-2) and Elgin City (7-0) before winning 4-1 away to Stenhousemuir last weekend. They host Stirling Albion at Balmoor on Saturday, having lost 4-2 at home to the Binos in August.

17 Annan Athletic have the best defensive record in Ladbrokes League 2, with only 17 goals conceded in 20 matches. Across the entire SPFL, only Celtic and Raith Rovers have shipped fewer goals and it's helped the Galabankies challenge for the play-offs after a slow start to the season. Peter Murphy's men are two points behind fourth-placed Stirling Albion as they prepare to face Berwick Rangers at Shielfield.