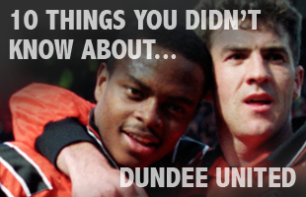 Dundee United welcome neighbours Dundee to Tannadice in the third round of the Scottish League Cup this evening.

Dundee United welcome neighbours Dundee to Tannadice in the third round of the Scottish League Cup this evening.

Jackie McNamara’s men go into the match on a high after beating Paul Hartley’s team 4-1 in a Premiership match at Dens Park on Sunday.

1 They began life as Dundee Hibernian back in 1909. Their first game was against Hibernian (the Edinburgh version) and it ended in 1-1 draw at what was Clepington Park and is now much better known as Tannadice.

2 The name Dundee United came about in 1923 when the club also opted to change their colours from green and white to black and white. The name Dundee City was considered but Dundee, who are based less than 200 yards away, objected.

3 Dundee United played their first match against Dumbarton in October 1923. Tangerine was first used for the Dundee United kit in 1969, with the idea coming from an American Tour where they played as the Dallas Tornado and wore their colours.

4 Dundee United’s Scottish League Cup tie against Dundee will bring back special memories for their fans. They lifted the trophy for the second time - just a year after defeating Aberdeen to lift their first piece of silverware - in December 1980 against their city rivals, with a 3-0 success at Dens Park.

5 Under the guidance of manager Jim McLean, who was charge for 22 years, Dundee United won the Premier League title in 1982/83. McLean’s men pipped Celtic and Aberdeen to the title by a point, sealing it with a 2-1 win at Dens Park on the final day.

7 United have twice knocked Barcelona out of European competition and have a 100% record against the Spanish giants! In the 1966/67 Inter-Cities Fairs Cup, Dundee United recorded a 2-1 success in the first meeting in Spain which was followed by a 2-0 home win. On their way to the final of the UEFA Cup in 1986/87, a Barcelona side containing Gary Lineker and Mark Hughes were defeated 1-0 at Tannadice, Kevin Gallacher scoring, and 2-1 in the Nou Camp.

8 Dundee United lost six Scottish Cup Finals before winning the trophy in 1994 with a 1-0 win over Rangers in 1994 thanks to a goal from Craig Brewster. The 2005 final was lost to Celtic before the trophy was won again in 2010 with a 3-0 victory over Ross County. United also reached the final of last season’s competition where they went down 2-0 to St Johnstone at Celtic Park.

9 The first player to receive an international cap as a Dundee United player was Swede Orjan Persson. The winger was with the Tayside club from 1964 to 1967 before heading for Rangers, where he played for three seasons and was selected for the team that made the World Cup Finals in 1970.

10 Goalkeeper Peter Bonetti, who played in 1970 World Cup for England, had a short spell with United in 1979. The ex-Chelsea No 1 had retired to the Isle of Mull to work as a postman but was talked into playing again and made seven appearances before being displaced by legendary United shot-stopper Hamish McAlpine.