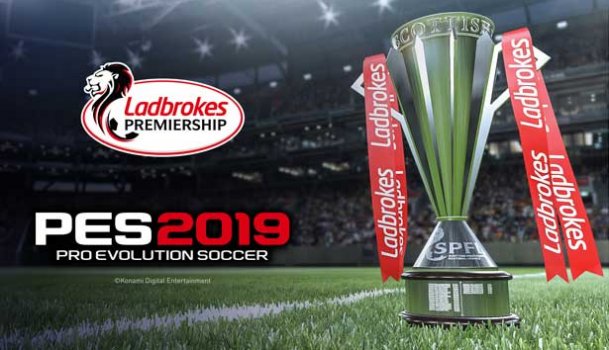 Konami Digital Entertainment B.V. has today confirmed that clubs from the Ladbrokes Premiership will be included in PES 2019.

Konami Digital Entertainment B.V. has today confirmed that clubs from the Ladbrokes Premiership will be included in PES 2019. Players will be able to experience one of the world’s most historic leagues including the iconic derby match between Celtic and Rangers. This announcement comes as part of KONAMI’s ongoing commitment to increase the number of licenses within the PES series.

KONAMI is particularly thrilled to be partnering with the Scottish Professional Football League (SPFL) ahead of a fascinating season for Scotland’s top league. Celtic may have just celebrated a seventh straight league title, but with Rangers having recently revealed England and Liverpool legend Steven Gerrard as their new coach, along with a host of teams such as Aberdeen and Hibernian snapping at their heels, it could be the most competitive season in years.

PES 2019 is being made available on 4K HDR across all platforms as well as the use of ‘Enlighten’ software for true-to-life visual effects and real time ‘Global Illumination’ lighting and shadows, PES 2019 will offer fans improved in-game graphics. This means better crowd detail, real grass textures and the return of the incredibly popular snow weather effect making the notorious Scottish weather even more realistic!

The announcement of this license, in partnership with the SPFL, comes as Konami also announced other new leagues available in PES 2019. Also available will be the are the Danish Superliga, Liga NOS, Belgium Pro League, Swiss Super League and, exclusive to PES 2019, the Russian Premier Liga. All teams within the leagues will be fully licensed in PES 2019, as Konami continues to increase the number of licenses involved in the game.

“We are committed to continuing to give fans more of what they want – licensed content from the world’s most popular leagues” commented Jonas Lygaard, Senior Director for Brand and Business Development at Konami Digital Entertainment B.V. “PES continues to go from strength and the introduction of the Ladbrokes Premiership will be a hugely valuable addition. There are few leagues in the world that better demonstrate the passion and heart that are so synonymous with football. We continue to believe in the Power of Football and PES 2019 will be our most powerful game yet featuring more fully licensed leagues and clubs than ever before.”

“It is exciting to join the PES fold,” added Neil Doncaster (CEO at the SPFL). “We are looking forward to seeing stars from the Ladbrokes Premiership featuring alongside players from other leading leagues and clubs from around the world.”

PES 2019 will be available on PlayStation®4, Xbox One™ and PC via Steam on August 28th in the Americas and August 30th globally. PES 2019 will be available in two physical editions, with new global ambassador Phillippe Coutinho on the front cover of the standard edition and David Beckham on a special edition which gives fans the opportunity to unlock myClub bonuses. Also available at launch will be a digital-only Legend edition that will include even more content for myClub!