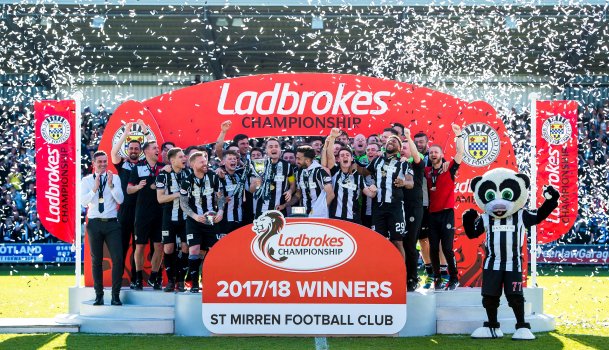 Championship Team of the Season

Craig Fowler&nbsp;selects his Championship Team of the Season, with representatives from Queen of the South, St Mirren, Greenock Morton, Dunfermline, Livingston and Inverness Caledonian Thistle!

Craig Fowler selects his Championship Team of the Season, with representatives from Queen of the South, St Mirren, Greenock Morton, Dunfermline, Livingston and Inverness Caledonian Thistle!

GK - Neil Alexander (Livingston)
Even at age 40 the former Rangers and Hearts goalkeeper was able to show himself as the best in the division. Not only a reliable keeper and strong shot-stopper, his communication skills helped Livingston become a robust defensive unit across the season.

CB - Craig Halkett (Livingston)
Not only a rock at the back, Halkett chipped in with eight goals across his 49 games in all competitions as Livingston stunned Scottish football to secure successive promotions and a place back in the top flight..

DC - Lee Ashcroft (Dunfermline Athletic)
The stingiest defence in the second tier didn't belong to St Mirren or Livingston but Allan Johnston's Dunfermline. The Pars conceded only 35 goals across the league campaign despite losing their goalkeeper for most of it and swapping around a lot of the personnel beside Ashcroft, who remained steady throughout.

DC - Alan Lithgow (Livingston)
It was between Lithgow and Halkett for Livingston's player of the year at the end of a fairytale season, but there's no reason why we should pick one or the other for this team. One of the most improved players in Scottish football over the last couple of seasons, Lithgow contributed another eight goals himself, including an all-important goal in the second leg draw with Dundee United in the play-off semi-final.

MC - Gary Harkins (Morton)
The midfield maestro pulled the strings for Morton throughout the campaign as Jim Duffy's men promised so much before ultimately falling away in the final months of the campaign. He also chipped in with eight league goals.

MC - Stephen McGinn (St Mirren)
The experienced midfielder led by example as the captain of Jack Ross' champions, often setting the tone with his exemplary play, particularly his passing, as the Buddies raced away from the chasing pack in the second half of the season.

ML - Lewis Morgan (St Mirren)
The Championship's biggest star, Morgan lit up the league, particularly in the opening half of the season as his constant star turns alerted Celtic to his talents. In the end he would finish with 20 goals and assists and will embark on a new adventure with Scottish football's champions with the best wishes of everyone at the Paisley 2021 Stadium.

AM - Cammy Smith (St Mirren)
While Morgan provided the flair, Smith brought the consistency. Due to his work rate and determination there didn't seem to be a match that went by where Smith wouldn't shine for the title winners. Although, it should be noted that he also had the required skill and ingenuity to be a match-winner, totalling 14 goals and assists in the league.

FC - Stephen Dobbie (Queen of the South)
The star man in the second tier from this past season. Despite playing for a side that would finish in sixth place, seven points short of the play-offs, Dobbie once again topped the scoring charts. He netted 18 in the league and 27 in all competitions, including a staggering four hat-tricks.

FC - Nicky Clark (Dunfermline Athletic)
The third-highest goalscorer in the Championship, Clark makes it in ahead of Dundee United's Scott McDonald because Dunfermline supporters appreciated his hard running and enthusiasm in attack. His purple patch in the spring helped lift the Pars into the play-offs - a spell which included two hat-tricks in the space of three games.