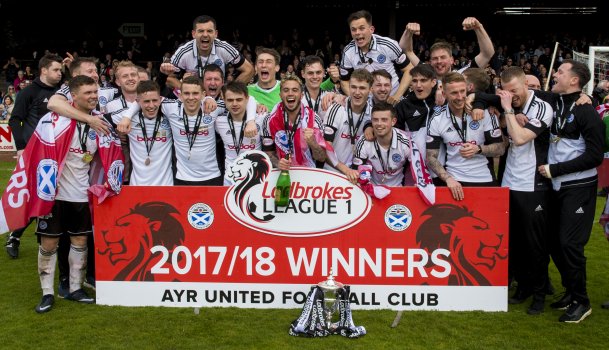 League 1 Team of the Season

GK - Marc McCallum (Forfar Athletic)
The signing of Marc McCallum was seen as something of a coup for Forfar Athletic, after the former Dundee United and Livingston custodian left Plymouth Argyle in the summer, and it isn’t difficult to see why, with his stellar performances one of the reasons why Jim Weir’s Loons side managed to move away from the drop zone over the second half of the campaign. Little wonder that his two-year contract extension, which he signed in November last year, was greeted with such enthusiasm by the Forfar fans.

RB - Scott Taggart (Alloa Athletic)
It’s been a successful, and record breaking season for Scott Taggart, who can play anywhere across the back four, although predominantly at right-back. Not only did the 26-year-old help Jim Goodwin’s side upset the odds by following Ayr United into the Championship, he also set a club record for an outfield player, by featuring in 92 consecutive matches, before missing a fixture against Forfar through suspension, leaving him one short of the all-time club record, set by goalkeeper Mark Cairns.

DC - Iain Davidson (Raith Rovers)
The 34-year-old has been shunted from the middle of the park to centre-half for the majority of his career, but he made the Raith Rovers central defensive berth his own last season, helping Raith to concede the second-fewest goals in the SPFL behind Celtic. While Raith would fall at the semi-final stage in the play-off, Davidson’s stand-out performances made him Rovers’ player of the season.

DC - Thomas O'Brien (Arbroath)
Arbroath may not have had an abundance of defenders on their books this term, with just a trio of out-and-out stoppers in their squad, but in Ricky Little, Colin Hamilton and especially Thomas O’Brien, they had three of the best at this level. O’Brien was reunited with Dick Campbell after playing under him at Forfar, and his performances in the centre of defence helped Arbroath reach the play-offs, where their hopes of a second successive promotion were dashed at the semi-final stage by Dumbarton.

LB - Callum Crane (Alloa Athletic)
The on-loan Hibernian youngster played a significant role in Alloa’s promotion from League 1, with the marauding left-back impressive at both ends of the park. Not only was he part of one of the meanest defences in the third tier, his willingness to get forward was one of the Wasps’ best attacking outlets, as their post-January form helped lift them into the promotion play-offs, and ultimately into the Championship, after their extra-time victory over Dumbarton in the final.

MID - Lewis Vaughan (Raith Rovers)
Lewis Vaughan has always been considered a number 10 since making his debut for Raith as a 16-year-old back in 2012, but he was utilised as a midfielder for the majority of last term by Barry Smith, as Rovers were pipped at the post by Ayr United in a thrilling title ding-dong. His early-season form saw him score in 11 consecutive games from a wide position and, while a move to central midfield curtailed his scoring prowess, he would end the season with 23 goals in all competitions, his best return by some margin.

MID - Iain Flannigan (Alloa Athletic)
The experienced Alloa midfielder enjoyed another fruitful campaign at the Indodrill Stadium, making his 100th start for the club against Arbroath back in February, and finishing the promotion campaign with nine goals in all competitions, just one behind top scorer Ross Stewart. The predominantly left-sided player has been hugely popular since joining the Clackmannanshire club back in 2013 and he played a starring role as Alloa eased aside Raith Rovers and Dumbarton to take their place in the second tier next term.

MID - Jamie Adams (Ayr United)
As much as Ian McCall set up his Ayr United side to go out and enjoy themselves each week, it would have been far less effective without a workhorse to sit in and do the dirty work. Thankfully they had someone who was ideally suited to the task in Jamie Adams, with the combative midfielder adding some much needed physicality to the Honest Men’s midfield, as well as giving protection to the back-line. The 30-year-old’s career has often been affected by injury, but his 30 appearances and five goals were a personal best, as Ayr clinched the title on the final day.

FC - Michael Moffat (Ayr United)
The veteran forward arrived at Somerset Park for his second spell after leaving Dunfermline Athletic in the summer, and he picked up exactly where he left off, with three goals in his first five appearances, eventually finishing up with 11 league goals for the season. However, he brings so much more to the party than just goals, with his ability to find pockets of space, hold up the ball and link midfield with attack, a major factor behind The Honest Men’s magnificent tally of 92 league goals.

FC - Alan Trouten (Albion Rovers)
Albion Rovers were only bottom of the table after one match this season, but unfortunately for them, it was following the 36th and final fixture of the season. With 20 league goals, more than a third of Rovers total, no player did more than Alan Trouten to try and extricate the Coatbridge side from trouble, but it wasn’t quite enough, as they finished one point behind ninth-placed Queen’s Park. Unsurprisingly, his excellent form attracted suitors, with Alloa snapping up the hitman after his contract expired at Cliftonhill.

FC - Lawrence Shankland (Ayr United)
It’s amusing to think back now, but Ian McCall’s signing of Lawrence Shankland in September last year was regarded in some quarters as unnecessary. Ayr had already mustered 34 goals in 11 league and cup matches before his arrival, with a defensive player seen as a bigger priority. Clearly McCall knew best though, with the 22-year-old pivotal to Ayr’s triumphant return to the Championship, scoring 29 goals in 33 appearances, while his overall performances made him an obvious choice as League 1’s player of the season.