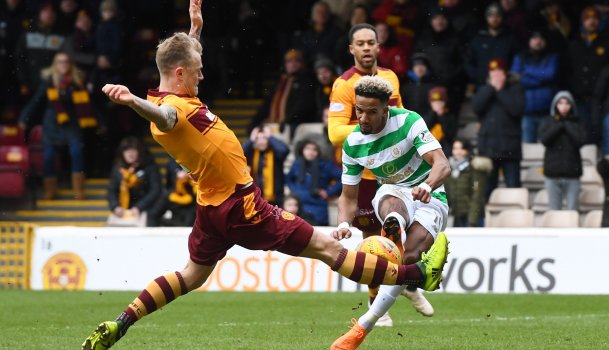 Craig Fowler selects his SPFL Team of the Week, with Motherwell full-back&nbsp;Richard Tait named star man for his sterling defensive display against Celtic.

GK - Cammy Bell (Hibernian)
Despite going down to 10 men in the first half, Hibs were able to secure a point from their trip to McDiarmid Park. A big reason for this was the play of Bell. The debutant was a reassuring presence in defence and made a terrific late save to deny Scott Tanser a sure-fire winner.

DR - Richard Tait (Motherwell)
Tait received a bottle of champagne for his efforts on Sunday as 10-man Motherwell managed to withstand relentless Celtic pressure to secure a well-earned point. His last-ditch tackle on Scott Sinclair was the game's defining moment. He is this week's star man.

DC - Kirk Broadfoot (Kilmarnock)
Another clean sheet against a Glasgow giant, on Saturday it was Kilmarnock managing to keep their terrific run going with a 1-0 victory at Ibrox. Broadfoot, a former Rangers defender, was in inspired form for the visitors.

DC - Jack Baird (St Mirren)
An immense performance from Baird helped St Mirren take a step closer to the Championship title with a 3-1 win at Queen of the South. That result, coupled with Livingston's draw at home to Falkirk, puts Jack Ross' side 12 points clear.

DL - Chris McLaughlin (Dumbarton)
Having not played in months, "Boomer" put in a fine performance as Dumbarton were able to gain a precious victory with a 3-1 triumph over Brechin City. The full-back's distribution was flawless as Stevie Aitken's men moved to within four points of Inverness CT in eighth place.

MC - Joaquim Adao (Hearts)
Hearts were able to put their recent poor form behind them with a comfortable 3-0 victory at home to Partick Thistle. All three goals were secured during the first half where Adao, the midfielder on loan from Sion, dominated the midfield area.

MC - Chidiebere Nwakali (Aberdeen)
The most impressive showing in an Aberdeen shirt to date from the on-loan Manchester City midfielder helped the Dons to a narrow 1-0 win over Dundee. The 21-year-old's poise and passing helped the home side stay in possession and on top of their visitors.

MC - Scott Martin (Arbroath)
A dynamic and determined display from the Hibs loanee helped Arbroath to victory over Albion Rovers. It was the second weekend in a row where Martin stood out from the crowd as he narrowly missed out on a place in last week's team.

FC - Aidan Keena (Queen's Park)
The Hearts loanee took his tally to seven goals in eight appearances since joining the Spiders on loan. His latest double helped Gus MacPherson's side register a 3-2 win away to Stranraer, a result which brings Queen's Park to within touching distance of the teams above them as they continue to sit bottom of League 1.

FC - Michael Moffat (Ayr United)
Ayr took full advantage of Raith Rovers' game with East Fife being postponed to move three points clear at the top of League 1. The Honest Men were able to better hosts Forfar by two goals to nil, with Moffat getting in on the act, nabbing his side's opener and putting in a polished performance overall.

FC - Chris Templeman (Montrose)
The veteran striker was more than a handful for the Peterhead defence as Stewart Petrie's side managed to defeat the Blue Toon in a top-of-the-table clash. Lewis Milne may have got the winner in the 3-2 victory, but it was Templeman who brought them back into the game when they were trailing 2-1 with just under 20 minutes remaining. Montrose now sit three points clear with a game in hand.